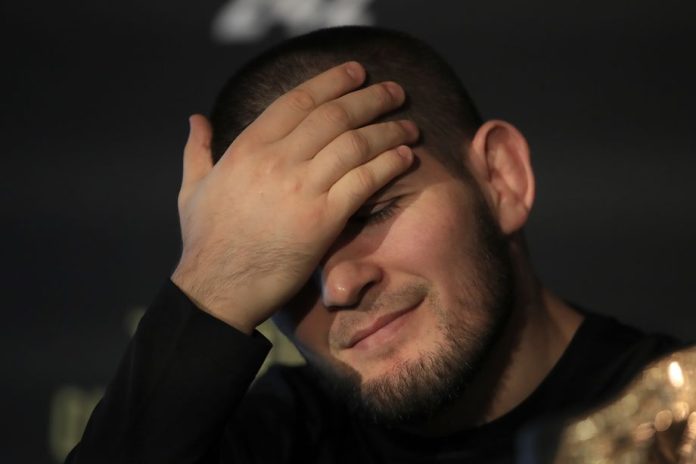 As a result, Chimaev was yanked from his Nate Diaz headliner and paired off with Kevin Holland in the co-main event. “Borz” still claimed victory, but his reputation in the MMA community took a big hit following his lack of professionalism.

Former UFC lightweight champion Khabib Nurmagomedov believes Chimaev should surround himself with muslims instead of fighters like Darren Till, who is known for drunken rampages, random street brawls, and eating too much “shit” between fights.

“If you are a Muslim, you should have good people around you, Muslims who can say: ‘Hey, don’t do this,’” Nurmagomedov said during a recent appearance (transcribed by Bloody Elbow). “I recently watched the weigh-in of Khamzat Chimaev. I followed what was happening with his weight and looked at his team. There are no Muslims around him and this is very bad. Because if you are a Muslim, you need good, strong people around you. [They] will say: ‘Come back, do this.’ When you become famous and rich, when you gain power and there are no people who will give advice or you do not listen to them, then something will happen. You need good people, even if you don’t like it, you need them.”

While Chimaev could probably afford to dial it back a little, it’s important to note that Nurmagomedov was not without his fair share of issues throughout his UFC tenure. “The Eagle” also missed weight and got into his own knock-down, drag-out brawl.

In addition to his weight management issues, Chimaev was wasting time and energy on a silly feud with middleweight goofball Paulo Costa then contributed to the UFC 279 press conference cancellation, which is now under investigation by the local commission.

Chimaev, 28, has yet to respond to Khabib’s edict.

Khabib chastises overweight Khamzat for not surrounding himself with muslims — ‘This is very bad’ – MMAmania.com