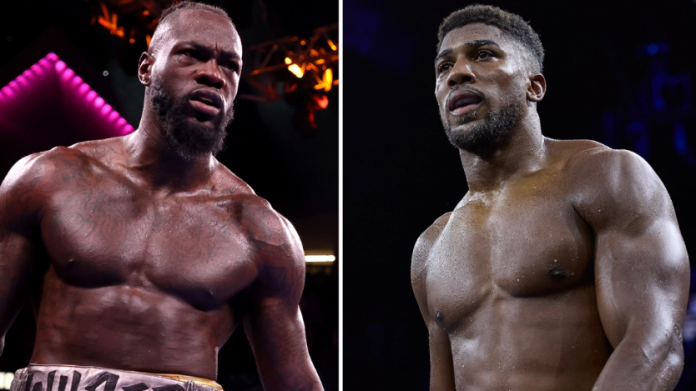 DEONTAY WILDER has revealed the only way he will fight Anthony Joshua… is by sharing a joint with him.

The Bronze Bomber is making his comeback to the squared circle on October 15 to face Finnish heavyweight Robert Helenius in New York.

It will be the first time the 36-year-old will have stepped back inside the ring since he was knocked out by Tyson Fury last year in their trilogy bout.

Like Wilder, Joshua is also coming off the back of two defeats after coming up short twice against unbeaten Ukrainian star Oleksandr Usyk.

But the 32-year-old is set for an instant return after accepting Tyson Fury’s 60-40 purse split terms ahead of a potential December 3 showdown.

It will give AJ the chance to claim the famous WBC belt – the only strap he is yet to collect having been a two-time WBA, WBO and IBF champion.

Olympic gold medallist Joshua expects to a have a contract in place for a domestic dust-up with Fury “in the next couple of days”.

And attention has already turned to who Joshua could fight after whether he returns to the pinnacle of the glamour division, or if he succumbs to a third straight loss.

American KO specialist Wilder has failed to agree terms with Joshua in the past over a fight, but he has now stated the one condition it would need to take to face him.

And that is for the two boxers, as well as their promoters, to enjoy a spliff together.

Speaking on the Last Stand Podcast, the Alabama native said: “I’m willing and able for everybody.

“I still wanna whoop that a**. I’m not gonna rob the fans of not making that fight happen.

“I definitely want that fight to happen. I just wanna know if they’re for real.”

Asked how the fight gets made, he remarked: “We’re gonna have to go to California and all just light one up and discuss it man.