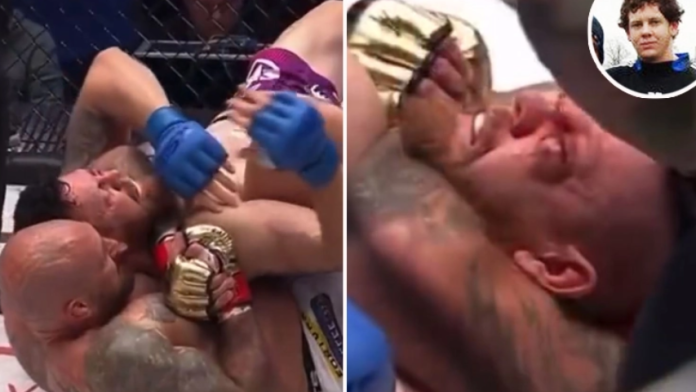 Prasel, 32, was forced to retire from football in his early 20s but has since forged a new career path in combat sports.

The 6ft 7″ former goalie had the opportunity to become a heavyweight champion after picking up wins over Michael Kita and Daniel Omielanczuk to set up a shot at the KSW title.

However, he fell to defeat as British champion Phil De Fries won the bout via a first-round submission at KSW 74.

Prasel posted a photo of himself to his Instagram page apologising to fans for the defeat.

Despite losing this heavyweight title fight, Prasel has an impressive record in MMA.

He holds a record of 13 wins and four defeats and was almost signed up by Dana White for UFC in 2019.

However, he lost to Don’Tale Mayes on Dana White’s Tuesday Night Contender Series.

During his brief career as a footballer, Prasel signed for Chelsea and was the club’s third-choice keeper behind Petr Cech and Henrique Hilario.

Upon reflection of his time at Chelsea, he admitted: “(Didier) Drogba was f***ing unbelievable, man.

“I didn’t go to the games with the professionals because I was the third goalkeeper — Cech and Hilario went to the games.

“But I played with them every day, because after training they wanted to practise shootout free kicks, and I had to be there to try to defend it.

“Thirty minutes every day, Drogba and (Michael) Ballack shooting free kicks. My God, they didn’t miss one. It was incredible.”

He told MMA junkie: “I think ‘Pudzian’ is the No. 1 contender. He’s on a five-fight winning streak. Also, he’s the money fight and the big eyes fight. Maybe I’m just saying that to get the fight.

“They want the ‘Pudzian’ fight, but I think ‘Pudzian’ wants loads of money to do it. I don’t blame him. Like, why? He can get paid a fortune to fight non-ranked guys or wrestlers.

“So why fight a guy who is dangerous when you can get the same money elsewhere? So he wants them to pay him, and I want a little bit extra. I have nothing but respect for ‘Pudzian.’ I would love to fight him.”