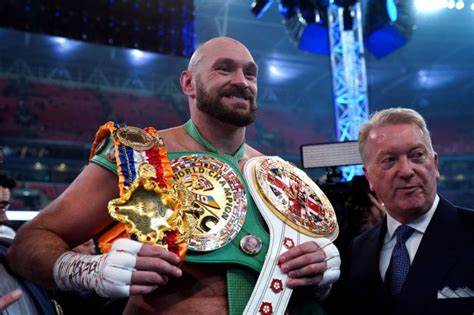 The Gypsy King has offered his compatriot, AJ, a shot at his WBC title with a 40 per cent split of the purse for what would be the biggest fight the country has ever seen.

There are still doubts about the possibility of the fight happening, particularly given Fury’s team want it to take place in November – just two months after Joshua’s loss to Oleksandr Usyk.

But if it does go ahead, the undefeated WBC champion Fury has already declared that he would be the overwhelming favourite against Joshua.

AJ’s promoter Eddie Hearn has confirmed that contact had been made between the two camps with Warren telling talkSPORT that a written offer was being submitted on Tuesday.

Fury’s co-promoter also revealed that Fury is adamant that it will take place in the UK – despite whatever big-money offers arrive from overseas.

And he believes that if they can deliver the fight that the world wants to see that it would become the most-bought boxing fight in UK history.

Warren said: “It will be in the UK and hopefully in November. That’s what we are looking at.

“How we make it work is that Tyson insists the fight is in the UK. So it’s got to work. He wants to fight here and deliver to the British fans.

“It will deliver a significant gate because there is massive interest from the British public and it will break all pay-per-view records. Whatever it generates is what it is worth.”

Warren added: “Once they confirm they are interested and accept the position where we are, we will work collectively to maximise the income between us.

“It depends what the price of the fight is, who knows what it would be priced at. I personally think it could hit two million buys.