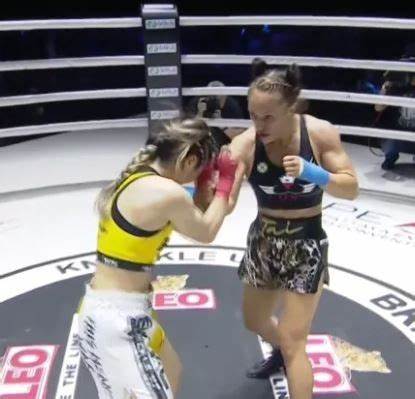 The 35-year-old Australian marked her debut fight in the Bare Knuckle Fighting Championship with a devastating KO in Thailand.

Emery sent opponent Rung-Arun Khunchai sprawling to the canvas in the first round with a brutally delivered right hook after a textbook uppercut.

She then celebrated her win by jumping up on to the ropes and lifting up her top to flash her breasts to the crowd.

And the fight commentators were left in awe by Emery’s bizarre choice of celebration.

The co-commentator meanwhile chose to address the elephant in the room, saying: “Interesting celebration right there, haven’t seen that one before!”

The BKFC posted footage of Emery’s X-rated celebration to their Instagram account… before it was hastily deleted.

Emery is a former American footballer and has her own OnlyFans channel.

Subscribers can pay to see raunchy content from the MMA star, whose bio on OnlyFans says: “Support the movement: BEAUTY (T******) &

She had lost her two amateur MMA fights before signing with the BKFC, but marked her first pro fight in style.

What made the victory even more impressive was her opponent, Khunchai, is a 60-fight Muay Boran veteran.