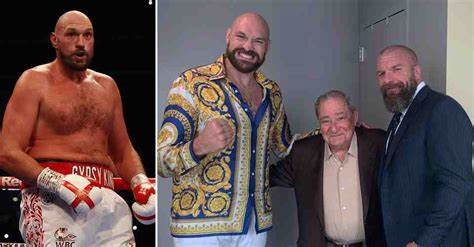 TYSON FURY has opened the door to a full-time WWE switch after his boxing retirement – but still has “lots of fights” left in his career.

The WBC heavyweight world champion starred in WWE’s Clash at The Castle pay-per-view event in Cardiff.

It came three years after he beat Braun Strowman at Crown Jewel in what was a successful in-ring debut.

Fury refused to rule out crossing over to wrestling to become a WWE superstar but only once his business in the boxing ring is over.

He said: “At the moment I’m a heavyweight world champion, and I have plenty of fights I have to take care of over the next few years.

“But I really, really have a passion for WWE. Never say never.”

Fury, 34, had retired after knocking out Dillian Whyte, also 34, in April but appears to have confirmed his boxing comeback.

It comes amid talks to face Oleksandr Usyk, 35, in a historic four-belt unification, the first in heavyweight history.

But Usyk just beat Anthony Joshua, 32, for a second time and has returned back to his war-torn home of Ukraine.

And he plans to rest and recover with his loved ones, having left his homeland to train amid Russia’s invasion.

But Fury meanwhile is not willing to wait around till next year and claimed he will announce his return fight NEXT WEEK.

He said: “Usyk was calling me out after his last fight with Joshua, I’ve replied and said let’s do the fight this year, wherever they want to do it.

“I’ve been waiting for offers from countries to come forward, and all of a sudden Usyk has stated he doesn’t want to fight any more, he wants to fight next year, not this year.

“So, I’m not going to wait around for anybody, I’m announcing a fight next week.”