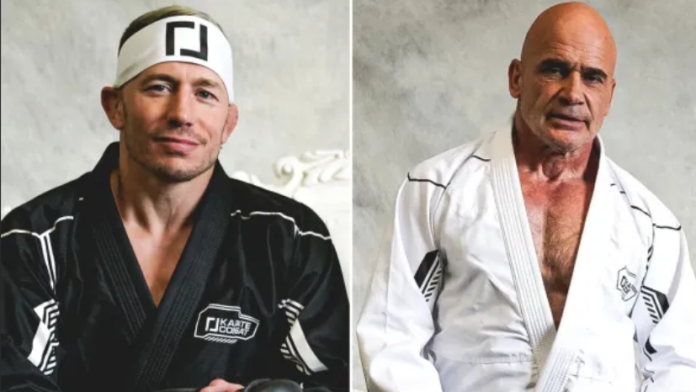 MMA pioneer Bas Rutten is desperate to see Georges St-Pierre make a return to karate – and has a dream matchup already laid out.

Rutten, a UFC legend, is now retired and works as an ambassador for Karate Combat, the sport’s only full contact league.

St-Pierre, who hung up his gloves in 2019, is also signed on in a prominent role in Karate Combat’s programming.

But the promotion’s president Adam Kovacs has done his best to try and persuade GSP to return to his karate roots.

St-Pierre began karate aged seven in a bid to defend himself from bullies but later reigned as one of the best fighters ever.

And Rutten believes debuting in Karate Combat would kick the organisation, only founded in 2018, to new heights.

He told SunSport: “That would be freaking amazing.

“Imagine if we could get him against Raymond Daniels or anybody, we have some really good fighters here.

“So it would be very hard to get him over here competing, he’s still here as a teacher, coach, sensei.

“But if we got GSP to sign? Forget about it, then we really put the whole show on the map. Then everybody will watch.”

St-Pierre, 41, is considered one of the greatest UFC fighters of all time, winning both the welterweight and middleweight strap.

But he has not fought since beating Michael Bisping, 43, in 2017 before retiring two years later.

He was close to fighting boxing legend Oscar De La Hoya, 49, in 2021 but he was prohibited due to having one bout left on his UFC contract.

It means he has an advisory role with Karate Combat, despite hopes he will one day compete in a bout, which are uniquely all filmed in movie studios.

And Rutten, a UFC Hall of Famer, named the American as the perfect opponent for St-Pierre to face under karate rules.

He said: “That would be a guy like Raymond Daniels, I think. Because he’s just so good at what he does, pinpoint accuracy.

“But you know with Georges also, he’s a smart guy, he’s not going to face just karate, he’s got great takedowns, which are allowed in karate combat.

“So he’s going to shoot for a takedown, ground and pound, I’m pretty sure that’s going to be his game plan because if he lets Raymond Daniels stay at a distance, you’re going to be in trouble.

“The guy does things we’ve never seen it before, that’s why I’m such a big fan and so excited they signed him. So that would be a fight to make.”