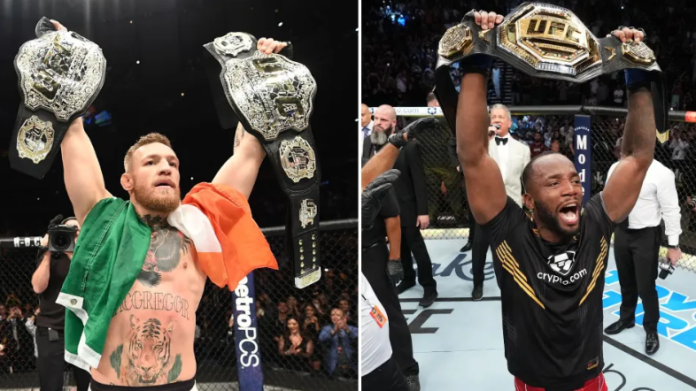 Former pound-for-pound king Usman is set to have a trilogy fight with Rocky early next year, but that hasn’t stopped McGregor from stating his interest in vying for the belt.

The Notorious tweeted: “I’d love a crack at this title somewhere down the line gimme gimme gimme.”

McGregor, 34, has fought three times at welterweight during his stint in the UFC.

The Irishman came up short in his 170lb debut at UFC 196, suffering a second-round submission loss to Nate Diaz.

But he was victorious in his second and third octagon forays at welterweight, defeating Diaz via majority decision at UFC 202 and knocking Donald Cerrone out in 40 seconds at UFC 246.

McGregor is currently in the final stages of recovering from the horrific broken leg he suffered in his trilogy fight with Dustin Poirier last July.

But he recently revealed his kicking with his left leg is not quite to the level it was before the injury.

And manager Tim Simpson has admitted the UFCs poster WON’T return to the octagon this year.

When asked about McGregor’s role in Roadhouse, he told MMAJunkie: “A fun little venture then switching back to climbing the mountain again.

“It fits in perfectly. He’s still on track for a big return next year.

He added: “Acting wasn’t something I think Conor had at the very front of his mind, right now he’s still a world-class athlete and his focus is being the best fighter in the world.

“It’s a great opportunity to do a big Hollywood blockbuster in meantime and he’s going to kill it.

“The leg is still healing, I think there’s a little bit more to go on that but he’s been training like a madman. Twice a day, every day.

“He’s been training super hard, he’s in amazing shape it’s just the final adjustments to get that leg where it’s supposed to be.”