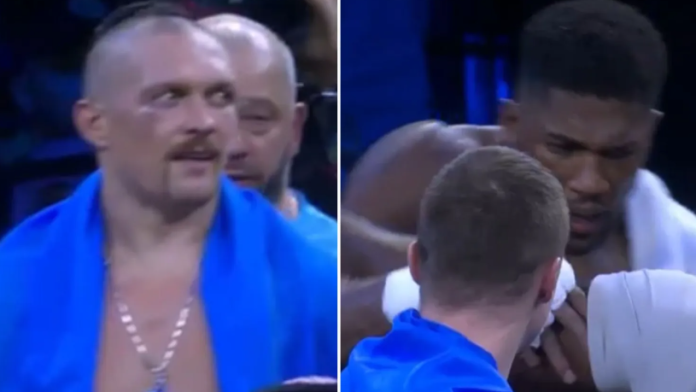 OLEKSANDR USYK was left visibly puzzled after Anthony Joshua threw two of his title belts out of the ring.

AJ was beaten over 12 rounds by Ukraine’s pound-for-pound star for the second time in the space of a year.

And after the split-decision verdict was called out, Joshua lost his cool having been grown furious in the ring.

At one point he got ahold of Usyk’s WBA and Ring Magazine belts, lofted them in the air, before chucking both out the ring.

But AJ was not done there as he had to be held back by members of his team after being left irate by something Usyk’s trainer said to him.

He talked about his late start in boxing after avoiding jail, how he is heavier than legends of the past and Ukraine’s series of wars.

Joshua was slammed for his rant but was defended by his promoter Eddie Hearn, who addressed why AJ tossed the belts away.

Hearn told iFL TV: “He’s held on to those belts for a long time, and those governing bodies have charged him a lot of money and put a lot of mandatories on him.

“And I think he’s lost a lot of faith in the system and I think he started to not be interested in fighting for belts anymore.

“I think he just wants to fight for enjoyment and to challenge himself.

“Of course, he wanted to be undisputed, but a lot of that was frustration.

“He left the ring, because he knew, ‘I’m gonna do something stupid, yeah.’

“And he forced himself, ‘I can’t (just leave),’ so he went back in the ring and he gave a speech, which, he was a little bit out of it.

“But it was just pure emotion. That was just from the heart.”

Joshua himself apologised on Twitter and congratulated unbeaten Usyk, 35, once more on his win.

He posted: “I wish @usykaa continued success in your quest for greatness. You are a class act champ.

“Yesterday I had to mentally take myself into a dark place to compete for the championship belts!