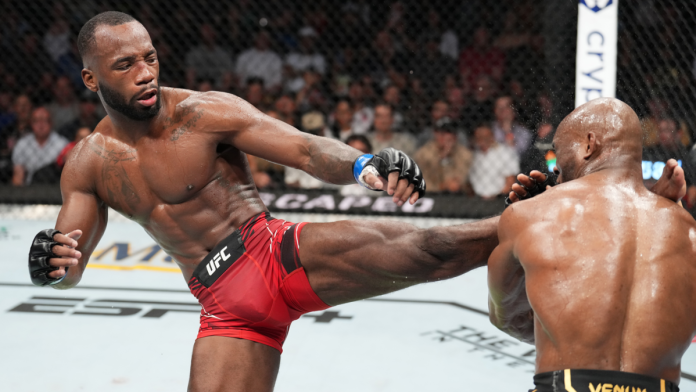 The Jamaican-born Brit ended the Nigerian Nightmare‘s dominant reign over the welterweight division on Sunday morning in the main event of UFC 278 in Salt Lake City.

Edwards, 30, stopped the Nigerian Nightmare with a stunning Hail Mary head kick with 56 seconds left in the fifth and final round.

In his post-fight interview, an emotional Edwards said: “I can’t put it into words, Joe.

“It’s been a long four years. You all doubted me and said I couldn’t do it.

“You all said I couldn’t do it. Look at me now. Never again. Pound-for-pound, what?

Usman immediately took the centre of the octagon as Edwards was happy to operate on the outside and feints his way in.

An early teep was caught by the former champion, although he did nothing with the countering opportunity.

Edwards showed improved takedown defence in the round, stuffing Usman’s first attempt to ground the fight – although he struggled to break his body lock.

But seconds after breaking the lock, he soon found himself in full mount thanks to a beautiful trip.

A nasty elbow hurt Usman and forced him to give up his back, which Rocky took with ease.

And he almost cinched a rear-naked choke before the stanza was over.

Usman immediately put the challenger under pressure after giving up the first round – closing the distance and not giving him any room to operate.

Edwards stung the former champ with a big one-two but soon found himself on the receiving end of a big right hand.

Usman eventually went back to his wrestling and grounded the fight until the end of the round.

The wrestling of Usman began to suffocate Edwards in the third and fourth rounds and seemed to take the spirit out of him.

The former champ continued to stifle and squeeze the heart out of Edwards with his pressure-heavy grappling against the cage in the fifth.

But with 56 seconds to go, Edwards lined up Usman with a picture-perfect head kick that separated the pound-for-pound king from consciousness and saw him become only the second Brit to hold UK gold.

Edwards said of his insane comeback KO: “I know [I was behind] on the scorecards I know.

“But it doesn’t matter, I’m from the trenches. I’m built like this. I go until it’s done.

“I do it for everyone who comes behind me. I told you it was possible. We can win a belt from the UK. I told you.