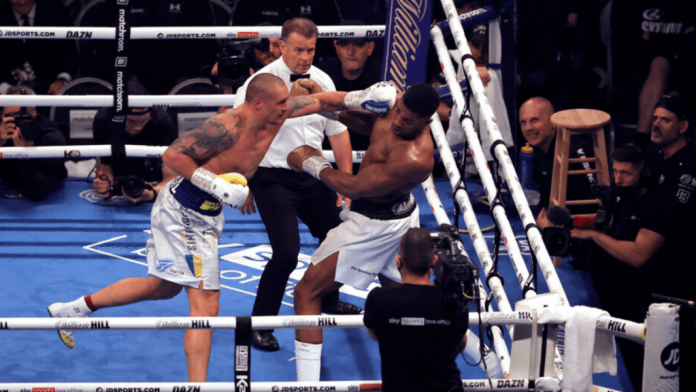 Anthony Joshua vs Oleksandr Usyk 2 weigh in: What time does it start and how do I watch it for FREE?

ANTHONY JOSHUA and Oleksandr Usyk finally face off this weekend in their huge rematch in Saudi Arabia.

But before fight night, the pair will tip the scales with defending champion Usyk looking to have bulked up considerably from the first fight.

Last time out, in September 2021, there was over a STONE of difference between the pair with AJ weighing in at 17st 2bs to Usyk’s 15st 8lbs.

But this time Usyk could weigh over 16st.

According to trainer Dave Coldwell, who coached Tony Bellew against the heavyweight champion, this is the wrong approach to take.

Coldwell said: “From an Usyk point of view, I get that he is going to be more aggressive and look to land bigger shots but with his mobility and speed being his two greatest assets they will take a hit.

“It’s going to slow him down, if you’re losing speed, you’re giving more options to be hit and not only that I believe that AJ really needs to focus on going to Usyk’s body to take away his legs.”

When is the Joshua vs Usyk 2 weigh in?

The weigh in for Anthony Joshua vs Oleksandr Usyk 2 takes place a day before the fight, on Friday August 19.

The weigh in will start from 1pm BST. This is 3pm over in Saudi Arabia.

What live stream and TV channel is the weigh in on?

You can watch the weigh in for FREE on Sky Sports Boxing YouTube.

Anthony Joshua vs Oleksandr Usyk 2 is on Saturday night.

The fight has been confirmed to start at 10.54pm approx.