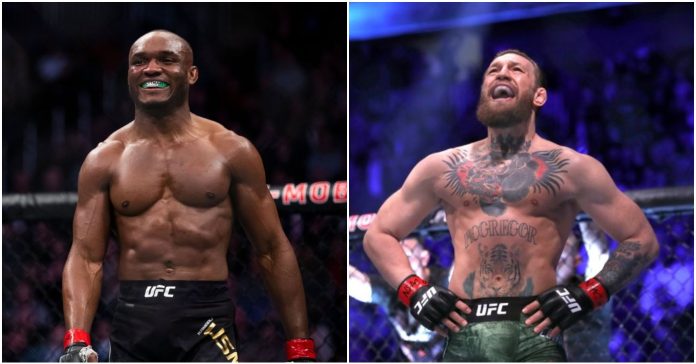 The Notorious set his sights on a shock showdown with the promotion’s 170lb king in March, much to the surprise of many.

McGregor has only fought once at welterweight, but Usman is willing to let him skip the line of contenders in the division so he can “grab that” huge cheque that comes with fighting the Irishman.

During an appearance on the I AM Athlete Podcast, he said of McGregor: “He can call me out, but that don’t mean he’s going to fight me.

“It’s not necessarily that they protect him, because he’s bigger to where he can pick, where he can call his shots. He’s that big.

“When I watch fights, I watch their hearts, and for me, he’s done, because I don’t know whether the goal was to get the money.”

McGregor, 34, has only fought seven times in the octagon in the last six years thanks to his multi-million-pound boxing match with Floyd Mayweather Jr and the pandemic.

And Usman believes the former two-division champion’s vast riches have put paid to his title ambitions.

The Nigerian Nightmare said: “There’s a story about him, he was broke.

“For me, it seemed like it was about not being broke, getting money. So I understand that. Now he’s not broke.

“He’s not necessarily done, but he’s done as a champion.”

Pound-for-pound king Usman is gearing up for a rematch with Brit Leon Edwards, whom he’ll defend his title against a week on Sunday morning at UFC 278 in Salt Lake City.

McGregor, meanwhile, is currently in the final stages of recovering from the horrific broken leg he suffered in his trilogy fight with Dustin Poirier last July.

After reflecting on UFC 277 late last month, Mystic Mac said in a Twitter voice note: “I’m buzzing cuz I want to come back.

“Thank you all so much for the entertainment and I’ll see you real soon.”