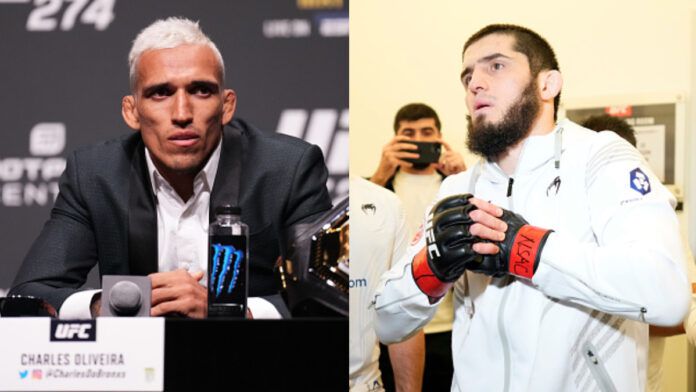 UFC lightweight contender Islam Makhachev feels his upcoming title fight against Charles Oliveira came to fruition for only one reason.

Makhachev and Oliveira will square off in the UFC 280 headliner on Oct. 22. The two top lightweight contenders will battle for the now-vacant lightweight title after Oliveira was stripped of the belt earlier this year.

A matchup between Makhachev and Oliveira had been in the works for months but hit several roadblocks as the two sides grumbled about where the fight should take place. After originally declining a fight in Abu Dhabi, Oliveira changed his mind and signed on the dotted line for the Fight Island showcase.

Makhachev has been critical of Oliveira in recent months, including his ability to promote fights. Ahead of the biggest fight of his life, Makhachev alleges the UFC had to pressure Oliveira to take the fight and moved past his prior opponent targets.

During a recent interview with DC&RC, Makhachev went off on Oliveira’s recent callouts.

“For me, this is embarrassing when UFC lightweight champion asks someone like Nate Diaz or Conor McGregor, who won like five years ago, nobody remember when those guys won (a) fight,” Makhachev exclaimed. “He tried to call Diaz, McGregor, but he forget my name. And when they ask about me, they say he need money or something like this. But when he fight with Dustin or Justin Gaethje, he don’t think about money. Now, when they say he has to fight vs. Islam, he always say, ‘I want to fight in Brazil, I want to fight end of this year,’ or, ‘I need some money.’”

Makhachev was then asked for clarification on whether or not he felt Oliveira was making excuses ahead of their fight and revealed the alleged ultimatum the UFC gave him if he didn’t accept the UFC 280 bout.

“Of course. He say, ‘Islam have to fight one more time’ or something like this,” Makhachev said. “But UFC tell him, ‘Hey, if you (don’t) take this fight, we’re gonna give same chance to Michael Chandler. That’s why he (took) this fight.”

Michael Chandler most recently defeated Tony Ferguson at UFC 274 on the same card as Oliveira’s victory over Justin Gaethje. He appears set to face Dustin Poirier in a grudge match later this year.

Oliveira vs. Makhachev is one of the biggest fights of 2022 and the trash talk between the two has just started to heat up. After the fight allegedly came close to falling through, fans will be in for a treat on Oct. 22.

What is your prediction for Islam Makhachev vs. Charles Oliveira?