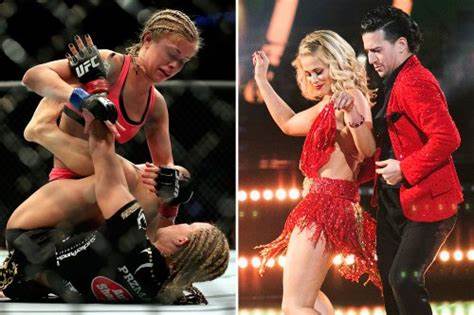 PAIGE VANZANT is determined to bag herself a better deal, wherever it may be, after claiming she made more money from ‘Dancing with the Stars’ than her whole UFC career.

The 28-year-old beauty, who has become a huge favourite with her 3.2m Instagram fans, now fights in bare knuckle boxing.

She went to Fight Island to face Amanda Ribas at UFC 251 in 2020 in her last fight for the promotion.

But the star revealed her hopes to land herself a more lucrative deal after her trip to the Middle East.

VanZant, who took part in hit US TV show ‘Dancing with the Stars’ back in 2016, told ESPN in 2020: “I have my heart set and nobody is going to change my mind that I’m fighting my contract out.

“I don’t know where my future lies – I truly don’t. I think that’s kind of an exciting thing in my life.

“I’ve been with the UFC for six years now, and through this time I’m still – which is crazy – on the same contract before I fought Rose [Namajunas] at 22-years-old, and I’m 26 now.”

She continued: “I just feel like a regular extension isn’t what I want. I want to prove my worth and my value and I want a brand new contract.

“I’m really excited to get the opportunity and really test the free agency because how do you know what your value is unless you can go test it among the other sharks?”

VanZant claimed to earn just $46,000 a fight with Dana White’s UFC with that figure double for a victory, which would take her earnings up to $670k should she overcome Ribas.

That is less money than she pocketed for her venture onto TV and Instagram earnings.

“I’m not going to hide that because everyone knows. I can make way more money than that just promoting brands on Instagram, and that should say something.

“Why would I step away from all the amazing success that I have? I made more money on ‘Dancing with the Stars’ than I have in my entire UFC career combined – every fight, every win, every bonus.

“I love fighting. It’s what I love to do, and for this fight I dropped every single sponsor. I haven’t posted anything on Instagram.

“Nothing matters to me except this fight and it’s a clean slate for me. I’m just excited to go out there and prove my value to absolutely everybody. And I think that fighting is how I do that.”

VanZant will fight Charisa Sigala in London later this month as part of the BKFC promotion.

It is her third fight with the brand and she’s desperate for a win after losing the first two.