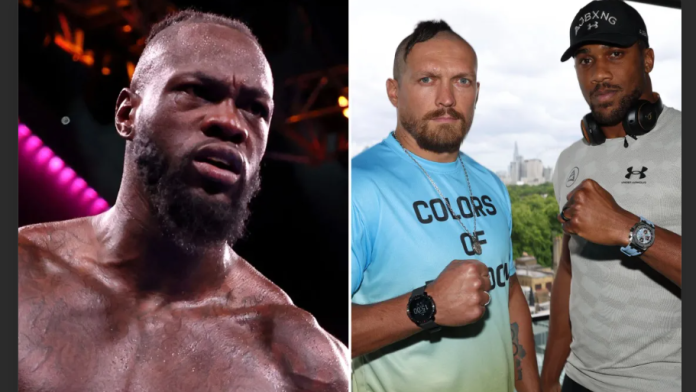 ANTHONY JOSHUA has been given the green light to fight Deontay Wilder – even if he LOSES his rematch with Oleksandr Usyk.

A win would regain the WBA, IBF and WBO belts and put AJ back on course for an undisputed decider with WBC champion Tyson Fury.

But a second consecutive loss at the hands of Ukraine’s pound-for-pound star would leave Joshua’s stock at an all-time low.

Despite that, Wilder’s Hall of Fame manager Shelly Finkel would still be interested in pitting the long-time rivals together.

Finkel told SunSport in New York: “I believe that fight is enormous even if he loses to Usyk.”

Wilder, 36, is yet to return since defeat to Fury, 33, in their epic Las Vegas trilogy bout in October.

Whereas the Gypsy King beat Dillian Whyte, 34, in April but announced his boxing retirement after.

Fury still remains linked with a comeback, to challenge the winner between Usyk, 35, and Joshua, 32.

But the likes of Eddie Hearn reckon the unbeaten champ will only fight again if AJ is victorious in the Middle East.

Although Finkel believes if the Saudis front the right amount of cash, Fury would return against Usyk or anyone else in the division.

He said: “I don’t know anyone else’s numbers or money, it’s not my business but I heard that the Saudis put up a lot of money for Joshua to fight Usyk over there.

“I don’t believe Joshua – Usyk now is as big as Fury – Usyk is. And, being for all the belts, the Saudis may step up. Who knows?

“So there’s a lot of moving pieces but what I do know is there’s four big names at this point and that is Fury, Usyk, Joshua and Deontay.

“And this month, two of those guys will be fighting and that will clarify what the future is.”

Wilder’s boxing future looked up in the air after his brutal 11th round knockout loss to Fury and a state of radio silence afterwards.

But the hard-hitting American is back in training and already in talks for a return fight.

Finkel said: “Spoke with him on Tuesday, he couldn’t be happier.

“He’s having a great time and he’s getting more attention now than ever before. He’s out in Vegas training and he’s very happy.

“He’s at the UFC gym training, we’re not exactly sure where the next fight will be yet but I would hope to have that together in the next week or so.

“I think next week we’ll probably have an agreement and then an announcement.”