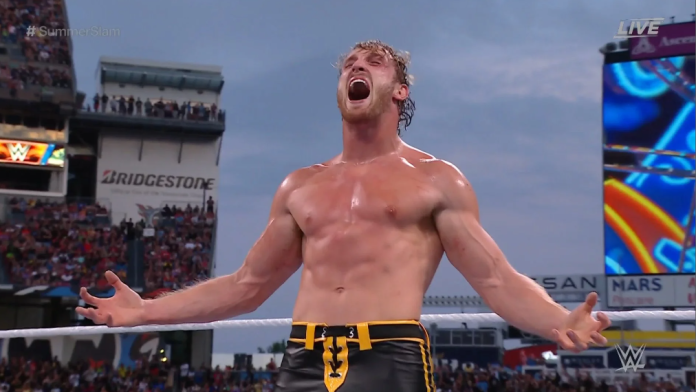 LOGAN PAUL pulled off an epic frogsplash during his SummerSlam victory on Saturday night.

The YouTube star hurled himself off the top rope and flew through the Nashville night sky.

Paul landed his move on The Miz, who was sprawled out on the announcers’ desk at the back of the arena.

The 27-year-old tried to pin his opponent there and then, but Maryse rushed to The Miz’s rescue by distracting the referee.

Miz then tried to attack Paul with what looked like a polaroid camera.

But the YouTuber ducked and Miz almost took out his wife Maryse – who was still on the apron.

Paul took advantage of the mistake by hitting a skull-crushing finale.

And he pinned The Miz to claim victory on the PPV event in Nashville, Tennessee.

After his win, Paul shouted into the camera: “That’s how a champ does it.”

Paul got a helping hand from AJ Styles after the match as well.

Tommaso Ciampa looked ready to ambush the YouTube star before Styles rushed to his aid.

It could tee up a tag team between Paul and Styles for the next storyline.