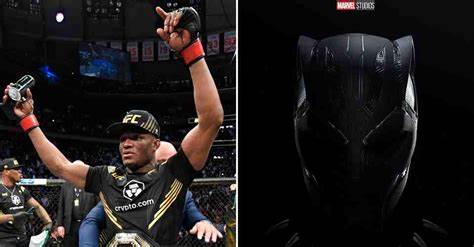 UFC welterweight champion Kamaru Usman has landed himself a role in the upcoming Black Panther sequel.

And three years after his dominant victory over then-champion Tyron Woodley, Usman has will feature in the second instalment of the hit Black Panther franchise.

And the pound-for-pound king confirmed his involvement in the film on Sunday night by tweeting a poster for the movie – which will be released in cinemas on November 11.

UFC fans were quick to comment, with one saying: “I don’t like Usman but it’s cool exposure for the sport.”

Another said: “Nigerian king is coming to the BIG screen!”

And another said: “Usman is making a cameo in the movie. What if he’s the new black panther?!!”

One remarked: “Imagine Usman as a multiverse, Black Panther.”

Another chimed in: “Wakanda forever.”

It’s not known what Usman’s role in the eagerly-anticipated sequel will be – although it’s most likely to be a cameo.

Usman, 35, is currently gearing up to make the sixth defence of his welterweight title later this month.

Brit Leon Edwards will bid to dethrone the pound-for-pound king at UFC 278 in a rematch seven years in the making.

His improvements have impressed Usman, who recently said: “Leon is much sharper with his striking.

“He has excellent striking. I mean, let’s just be honest.

“We saw it in the fight with Nate Diaz. He tortured him for four-and-a-half rounds.

“And then Nate Diaz did what Nate Diaz does best, come in there and land that shot and steal all the glory.

“You forgot Leon Edwards won that fight, right? So I think Leon is much improved.