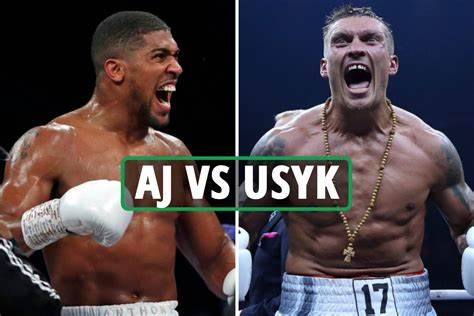 BOXING fans have expressed their anger at Sky Sports’ Pay-Per-View price for Anthony Joshua’s rematch against Oleksandr Usyk on August 20.

The pair will trade blows once again with the WBA, WBO and IBF heavyweight titles on the line in Jeddah next month.

Despite AJ signing a £100million deal with streaming giants DAZN, Sky Sports will show the dust-up on PPV.

It comes after SunSport exclusively revealed that the broadcaster won the rights to show it on Box Office for £25m.

When Usyk outpointed AJ at the Tottenham Hotspur Stadium in September, Sky charged customers £24.95 to watch the event.

And they have now increased the price by an extra £2 to make the rematch the highest PPV price in British boxing history.

And fans were quick to take to social media to criticise the whopping price for the fight, which has been dubbed the Rage on the Red Sea.

Another remarked: “No wonder people will stream it on fire sticks and what not. £27 is becoming a joke now.

“It won’t be long before Amazon and DAZN take it all with Sky and BT’s ridiculous pricing.”

This fan sarcastically messaged: “Cheers for putting price up!”

Meanwhile one quipped: “£27 and they wonder why people stream illegally.”

Another said: “I’ve watched most of Joshua’s fights so far and paid but I am skipping this one.”

Failing to contain his disappointment, one then simply stated: “Plain greed. Losing a usual customer”