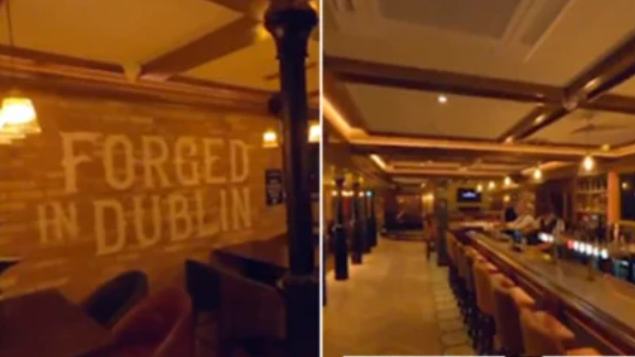 CONOR McGREGOR is the proud owner of plush pub The Black Forge Inn.

The Irish superstar bought the property – situated in his hometown of Crumlin, Dublin – in 2019 for £2million.

It is the same place he delivered bottles of his Proper No Twelve whiskey in Christmas 2018.

In January this year it was the target of a shocking petrol bomb attack as thugs staged a night-time assault on the premises.

Gardaí launched an investigation after two pipe bombs were also reportedly found at the scene.

No damage was reported but cops are still appealing for witnesses to come forward.

McGregor, 34, previously offered fans a behind-the-scenes look at the pub on social media.

It is classically styled with a restaurant area as you walk in with chairs by the bar, an open kitchen and seating space for customers.

But as you go further inside, there is a bar section purely for drinkers, sure to sell McGregor’s popular Proper No Twelve whiskey.

Bar staff can be seen making fancy cocktails – including one making use of a blow torch.

On the wall is a painted stencil of the same tiger that McGregor has tattooed on his chest.

The former two-weight UFC champion plans to open a chain of pubs across the world.

And he made headlines earlier in the year after also acquiring The Marble Arch in Drimnagh – the scene of his infamous assault on a man in 2019.

Along with the pubs, his other businesses are flying, which include sports recovery spray Tidl, a fashion line with David August and fitness app ‘McGregor Fast’.

Earlier in the year, McGregor sold shares in Proper 12, in a deal which banked him close to £130m.

It made him Forbes’ highest-paid athlete over the last 12 months, pipping footballers Lionel Messi and Cristiano Ronaldo.

And McGregor’s wealth would have rocketed further after his pay-per-view trilogy fight with Dustin Poirier.

But it ended in disaster for the southpaw, who broke his tibia before the end of round one, losing by doctor stoppage.

McGregor later underwent surgery and is only just beginning to get close to a return to action.

SunSport revealed how the UFC star is in talks with Floyd Mayweather over a sensational rematch.

The pair are “very close” to cutting a deal for the multi-million dollar rematch – with Money “willing to put his unbeaten record on the line”, a source has claimed.