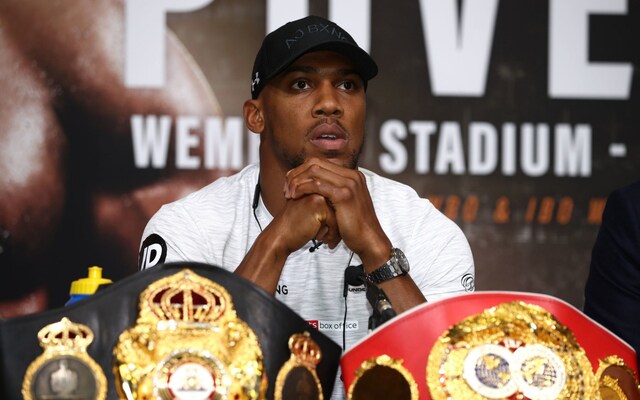 BOXING great Joe Calzaghe thinks Anthony Joshua made a mistake choosing Robert Garcia as his new coach ahead of his rematch with Oleksandr Usyk.

Joshua and Usyk are set to clash in a rematch on August 20 in Jeddah, Saudi Arabia as the British superstar looks to avenge last September’s defeat.

AJ axed former coach Robert McCracken after losing to his Ukrainian rival and went on a tour in the US in search of a new mentor, which led him to Garcia.

Calzaghe is not convinced the former unified world heavyweight champion has made the right choice.

The Welsh legend admits Joshua needed to make a change and time will tell if he made the correct call.

Calzaghe told Boxing Social: “I’m not sure we have to wait and see at the end of the day.

“I think it was time for him to have a change so I think that’s the right idea, whether Garcia is the right guy, I’m not sure, we’ll wait and see.

“I think he needs to change things and when a fighter realises they need to change, that’s a step in the right direction.

“He knows he tactically needs to change against Usyk who is a very, very, good boxer. His amateur pedigree, boxing from a young age, he’s an excellent boxer and a big guy.

“I think if Joshua can make his strength pay more in this fight and use his punching power – it could be really interesting.

“Look, it’s gonna be a tough ask but it’ll be an exciting fight.”

Joshua admitted he failed to meet some of the coaches he intended to while in the US.

However, the 32-year-old has full faith in Garcia, who has a track record of producing aggressive as well as powerful fighters, and described him as a “bad boy coach”.

Joshua said: “Texas, Fresno, LA, I saw a lot of coaches everywhere before choosing my new trainer – and there were coaches that I didn’t get to see – but he was the standout. Robert Garcia is a bad boy coach.”