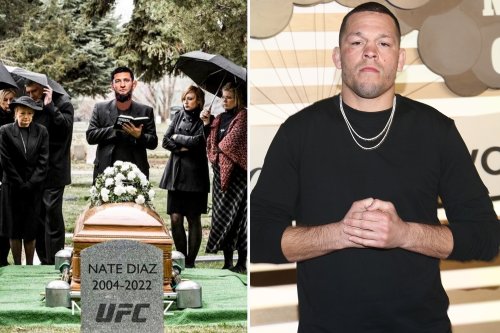 KHAMZAT CHIMAEV has promised to end Nate Diaz’s career with a funeral post on social media.

The Swedish star will fight UFC icon Diaz in the main event of UFC 279 in Las Vegas on September 10.

The bout will represent the last of Diaz’s current contract with the promotion and it could be his final fight.

Chimaev, 28, is confident he’ll beat the 37-year-old in their main event showdown.

He posted a photo online of a coffin being lowered into the ground at a funeral.

Diaz agreed to face the 28-year-old after 13 months out of the octagon.

He lost to Leon Edwards – though he came close to a win with a thunderous late right hand – and has lost thee of his last four bouts with Jorge Masvidal and Conor McGregor both beating him.

But he’s had a legendary career in the UFC dating back to when he joined in 2007.

Earlier this summer, Diaz said he was being held ‘hostage’ due to the contract situation.

Diaz had been eager to see out his contract sooner.

During an appearance on The MMA Hour earlier this summer, he said: “I was trying to get this s*** on the road, but they don’t want me out of contract and they’re keeping me in there and they’re holding me hostage.

“And I want out. That’s my main objective here.”

Diaz thought the UFC were trying to keep him around for a blockbuster trilogy fight with bitter rival Conor McGregor.

But the Ultimate Fighter season five winner has no intention of welcoming The Notorious back to the octagon.

The Stockton slugger said: “They don’t want to let me out of my contract.

“They want me to fight Conor. I’m not fighting Conor McGregor right now. Our timelines aren’t matching up.

“You bring yourself back to life, and I’ll be back later.”