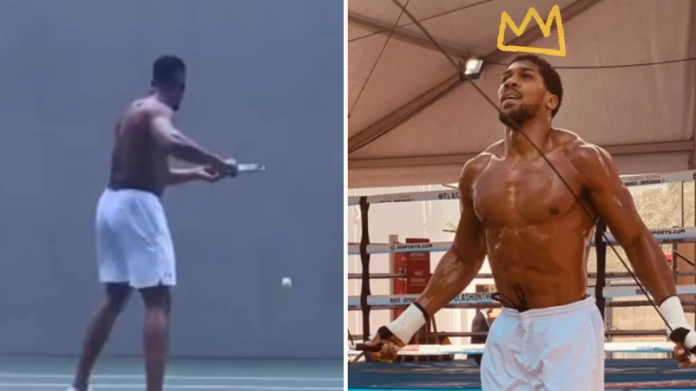 The 32-year-old London 2012 Olympic icon jetted out to the scorching kingdom at the weekend on a private jet, enjoying a Nando’s chicken dinner with his close-knit team.

And the six-hour flight was still an ideal time to train his mind for the task of dethroning the 35-year-old Ukraine southpaw king, with games of brain-training chess helping to pass the time.

Since Watford’s former WBA, IBF and WBO champ landed in the Middle East, flanked with new-look training team of Robert Garcia and Angel Fernandez, he has not stopped sweating.

At a private gym tucked away from prying eyes, AJ has whipped himself into shape on the skipping rope.

And the 24-2 ace has used the local facilities at a Jeddah sports club to play tennis in a shrewd effort to hone his hand-to-eye coordination for the upcoming combat.

Joshua came into criticism around the time of his 2019 stoppage loss to Andy Ruiz Jr for having a bloated training and support team around him.

But a source close to the stipped back camp has told SunSport that this training camp resembles a famously brutal Rocky regime, ripped back to the basics to bring out the best of the superstar.

AJ’s heavyweight training partner at his new Loughborough University base, Frazer Clarke, reckons new Mexican-American trainer Garcia – who has worked with 14 world champions – could be crucial to the new no-nonsense mindset.

The 2020 Olympic bronze winner said: “He is an experienced guy who has been there, seen it and done it.

“Big fights are not his first rodeo, he’s straight talking and to the point, he knows what he wants from his fighters and he demands it. So he can only be a good edition.

“He has worked with great fighters and winning is everything is about winning, and with him maybe more than some other coaches, it’s about knocking the other guy out.”

AJ revealed at the London launch press conference for the Rage on the Red Sea, that he was too focused on lasting the full 12 rounds when he lost on points last September.

And he has vowed to return to his old knockout-artist ways to get his old belts and career back on track.

And Clarke has seen his attitude alter to a win-at-all-costs close up in the gym.