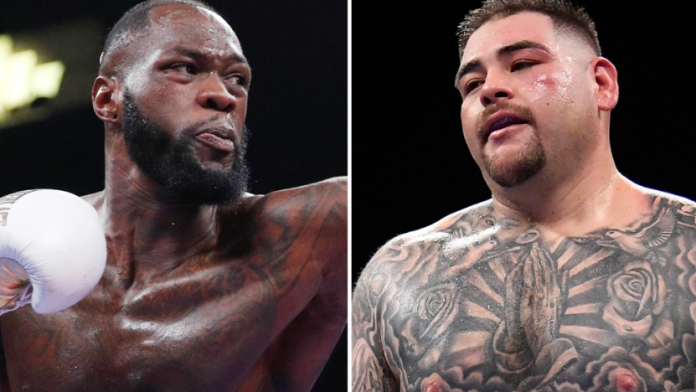 DEONTAY WILDER has been called out by Andy Ruiz Jr for a clash of former champions.

The Bronze Bomber hasn’t set foot inside the ring since his brutal 11th-round knockout loss to Tyson Fury last October but is hellbent on fighting again.

And former unified heavyweight champion Ruiz Jr – who is gearing up for a September showdown with Luis Ortiz – is champing at the bit to trade blows with his fellow American.

He told Boxing Scene: “[Wilder] was kind of saying that he didn’t want to, and makes more money outside of the ring than inside the ring.

“That kind of showed that he doesn’t really want to. I don’t blame him.

“All the hard work and dedication that he did over the years. He accomplished a lot and was a champion for so many years.

“He already did all the hard work, but so did I. I have enough money to where I don’t have to work anymore. We have houses that we’re making, and I make money every month.”

Ruiz Jr, 32, is refusing to overlook elder statement of the division Ortiz but is already envisaging a California clash with Wilder.

He told Fight Hub TV: “The heavyweight division is so open right now.

“I just got to get this win first against Luis Ortiz. Like I said, it’s a hard opponent, but, of course, I would love to fight Wilder if he comes out of retirement.

“I don’t know if he said he’s going to come out of retirement, but I would love to fight him.

“We’re both under PBC and Al Haymon, and that fight would be easy to make. Maybe right here at the Staples again.”

Wilder, 36, confirmed his intention to return to the ring earlier this year, saying: “I can’t stop right here, I must continue my journey. I have to, I have to.

“I’m looking to resume my career for sure. I’ve got a lot of other things I’ve got to get out of the way.

“I’m taking away from my children if I come back, because now I’m able to enjoy my life fully like I want to.

“I sacrificed so much to be in this position in my life, to be able to life my life like I want for the rest of my life.”

He added: “I’ve been highly requested. So many people have told me ‘Come back, come back.’ I’d say I’m back by popular demand.

“And the business of boxing needs me. When there’s a thriving American champion, there’s nothing like it.

“When there’s not, you see it’s dead. There’s a drought in [the sport]. People know the difference now.”