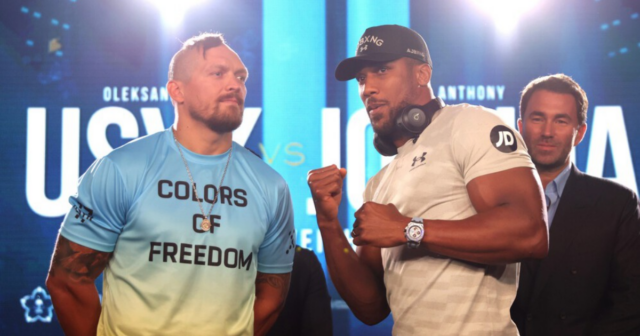 HEAVYWEIGHT Robert Helenius has claimed he will take legal action if he is not granted a shot at the winner of the rematch between Oleksandr Usyk and Anthony Joshua.

Usyk will defend his IBF, WBA and WBO belts against AJ in Saudi Arabia on August 20 – 11 months after the Ukrainian clinched a unanimous decision victory at the Tottenham Hotspur Stadium.

Regardless of who comes out on top next month, the winner will have mandatory challengers lining up to face them.

Joe Joyce is the No1 contender in the WBO, with Helenius in the same position with the WBA.

And, if Usyk or AJ are not willing to vacate the belts, they will be forced to face both Joyce and Helenius in the near-future.

The Finnish fighter, who has a professional record of 31-3, recently stopped Adam Kownacki twice with impressive performances.

But he is adamant he will secure his world title fight by whatever means necessary.

Speaking to Sky Sports, he said: “I am rightfully the WBA mandatory, so of course I am interested in the Usyk vs Joshua winner.”

He then continued: “I definitely should be next. Every elimination bout after mine is bulls***.

“At this point, if we are not designated the mandatory after Usyk’s next fight, we will only have one option.

“My lawyers are very confident that the WBA have bungled this whole thing, so I am confident in my position.”

Aside from the winner of Usyk-Joshua II, Helenius has also been linked with a fight against knockout artist Deontay Wilder.

The hard-hitting American has not yet returned to action following his second successive loss to Tyson Fury in October of last year.

But promoter Frank Warren revealed earlier this month that he has heard Wilder and Helenius are expected to fight in October.

And while the Finn has not specifically talked up a clash with the former WBC champion, he has hinted that a huge fight is on the horizon.

“For now I will just stay focused on training and see how Usyk vs Joshua and my WBA situation plays out,” he added.

“But I remain in a great position for something very big in the coming months for sure.”