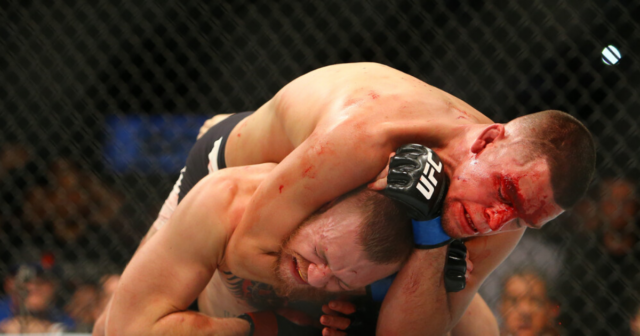 NATE DIAZ claimed he and Floyd Mayweather revealed the “blueprint” on how to beat Conor McGregor.

Diaz became the first man to ever beat McGregor in the UFC following a shock 2016 submission win.

The Irishman, who had jumped two divisions, started quick but faded in the second round before tapping out.

In a similar story, a year later McGregor, 34, won the early stages of his boxing debut against Mayweather, 45, but quickly tired.

Eventually, the American boxing legend won in round ten and a pattern in McGregor’s performances began to show.

Diaz, 37, said on The MMA Hour: “Floyd Mayweather went and showed the blueprint to beat him, let him punch himself out and in the tenth round he beat his ass.

“I did that right before him.”

McGregor returned a year after defeat to Mayweather and was again submitted, this time by arch nemesis Khabib Nurmagomedov, 33.

Diaz said: “Then he went and got choked out by Khabib.

“He could have got better but he didn’t. He jumped the line and skipped the queue and they helped him by fighting Mayweather.

“I am still relevant in the sport now without even trying, I haven’t even had a fight.”

Diaz has one fight left on his UFC contract but has begged for his release, refusing to wait around for the returning McGregor.

He said: “They don’t want to let me out of my contract.

“They want me to fight Conor. I’m not fighting Conor McGregor right now.

“Our timelines aren’t matching up. You bring yourself back to life, and I’ll be back later.”