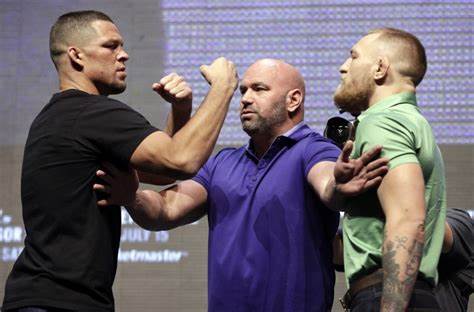 NATE DIAZ insists the UFC are holding him “hostage” after refusing to grant him his release.

The former lightweight title challenger has one fight remaining on his contract with the promotion and has been champing at the bit to see it off.

Diaz’s calls for a fight with anyone other than welterweight phenom Khamzat Chimaev have been ignored by the UFC brass, who have refused to grant the fan favourite’s subsequent requests to be released.

During an appearance on The MMA Hour, he said: “I was trying to get this s**t on the road, but they don’t want me out of contract and they’re keeping me in there and they’re holding me hostage.

“And I want out. That’s my main objective here.”

Diaz, 37, believes the UFC are trying to keep him around for a blockbuster trilogy fight with bitter rival Conor McGregor.

But the Ultimate Fighter season five winner has no intention of welcoming The Notorious back to the octagon.

The Stockton slugger said: “They don’t want to let me out of my contract.

“They want me to fight Conor. I’m not fighting Conor McGregor right now. Our timelines aren’t matching up.

“You bring yourself back to life, and I’ll be back later.”

Despite his best efforts, Diaz hasn’t set foot inside the octagon since losing his UFC 263 showdown with Brit Leon Edwards last June.

The future Hall-of-Famer is desperate to get out of his contract so he can test the free agency market.

He said: “I don’t want no more money.

“I want to go do different stuff. I went in there and talked to them, and it’s with all due respect.

“I might just re-sign afterwards, but I need out.”

Diaz has relentlessly used social media to try to convince the UFC to let him out of his contract.

On Tuesday night, he tweeted: “Freenatediaz.”