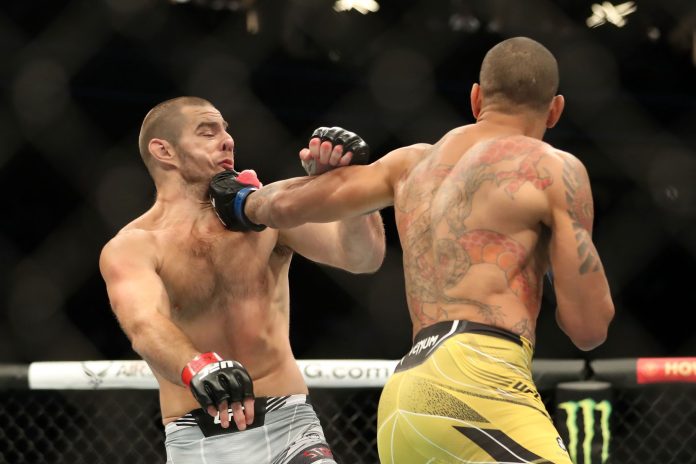 Should Sean Strickland be given a ‘pass’ for KO loss to Alex Pereira?

Sean Strickland suffered a brutal KO at UFC 276 a few weeks ago. The American middleweight, who had surged up the rankings lately, was stopped in his tracks by Alex Pereira—a man who now seems set to challenge old foe Israel Adesanya for the UFC middleweight title.

Strickland talked a lot of smack leading up to this fight, with both Pereira and Adesanya. However, during the fight with Poatan, he looked leagues below the Brazilian when it came to the striking game.

Many are wondering if Strickland, a far more experienced mixed martial artist, would have had better success trying to take Pereira down. However, by his own admission, Strickland really wanted to ‘stand and bang’ with one of the most feared strikers in the sport right now.

Former UFC title challenger Chael Sonnen believes Strickland’s eagerness to fight Pereira on the feet was a gift to fans. And for that reason, he deserves some credit.

“I can’t give Sean too hard of a time in fairness because the fight was so short,” Sonnen said (ht MMA Fighting). “We don’t know what was to come. We’re only looking at a couple minutes of fight here. Sean’s going forward, Sean hadn’t quite got down to cutting him off yet, the elevation change, some of these things could have still been in the plan and it got cut short.”

“Can we give Sean a pass? I mean, Sean was trying to do what the audience really wanted to see,” continued Sonnen. “The audience really wanted to see this fight but if we knew Sean was just going to go out, tackle him, put him in a realm he had never been in, all the sudden they lose interest a little bit. They wanted Sean to stand and trade. That’s you guys. You were the audience. That’s what you wanted, he went out and gave you what you wanted. Is it really fair that we kick him now?”

It certainly seems true that Strickland, by getting KO’d, gave a lot of fans what they wanted to see. The divisive fighter has taken steps to raise his notoriety over the past two years, usually through posting inflammatory and bigoted statements online.

Strickland has also seen his relevancy rise through ‘leaked’ sparring videos which show him going rough, and sometimes downright irresponsible, with his training partners.

Aside from the outside the cage stuff, Strickland was on an upward trajectory thanks to a six-fight winning streak that stretches back to 2018. During that run he beat Uriah Hall, Jack Hermansson and Brendan Allen.

Should Sean Strickland be given a ‘pass’ for KO loss to Alex Pereira? – Bloody Elbow