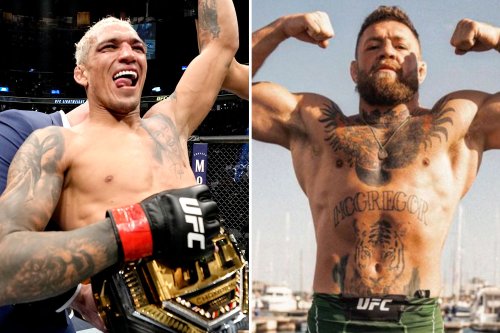 CHARLES OLIVEIRA wants to fight the returning Conor McGregor in a January homecoming in Brazil.

But Oliveira will only fight the No4 ranked contender if he is paid “a lot of money” by the UFC.

The Brazilian prefers a far more lucrative bout with McGregor.

He told Combate: “I really want a fight with McGregor in Brazil, in January.

“That would be really nice. Everyone knows I’m interested in that fight because of the money.

“But if the UFC wants me to fight Islam Makhachev next, they better put a lot of money in my bank account.

“The place doesn’t matter. I’m a professional, I’m the champ. Make it happen.”

McGregor, 33, in July 2021 broke his leg in the first round of his trilogy bout against Dustin Poirier, 33.

He has spent the last year rehabilitating and recovering with the Irishman edging towards a comeback date.