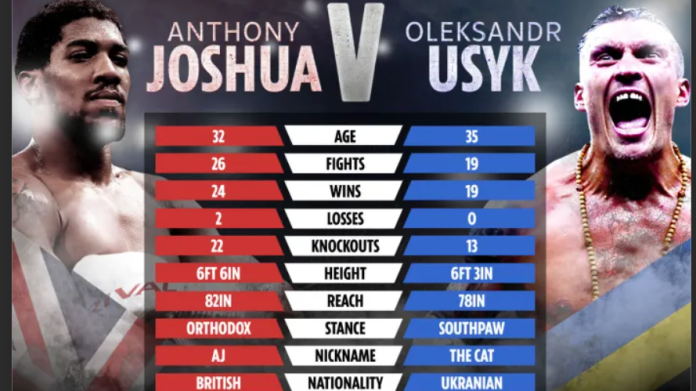 THE date is chiselled in stone now – Anthony Joshua’s re-match against Oleksandr Usyk is ON and the venue is ready.

Joshua and his Ukrainian counterpart had been due to do battle in May, and then July, but there were various hold-ups in negotiations which pushed the fight further back.

Russia’s war on Ukraine, where Usyk is from, also had an impact on the rematch with Joshua being made.

Usyk, 35, returned to his home country earlier this tear to join the fight against Russia, which began in February.

But he’s now in training camp for the biggest fight of his life, but one that he knows he can win.

Just like the Olympic gold medallist did after his loss to Andy Ruiz Jr in 2019, Joshua wants to right his wrong by facing the Ukrainian in a rematch.

Joshua’s promoter Eddie Hearn told The Sun earlier this month that his client is ‘baffled’ by the tactics used last year, and hinted at a change of gameplan for the rematch.

He said: “I was talking to him the other night and I think finally it’s baffled him why he fought like that.

“For a long time, he still felt even when he lost that he could still beat Usyk like that. But why when you don’t need to fight like that?

“He could fight in your old style and have a much better chance of beating him. Klitschko-style but Usyk is a tremendous fighter, a great counterpuncher.”

Hearn added that AJ “needs to be a lot more aggressive” this time.

The two sides spent months negotiating a money-spinning deal for AJ’s second fight in Saudi Arabia, having beaten Ruiz Jr on points in the oil-rich country in December 2019.

Joshua will also have a new training team, with the experienced Robert Garcia leading his corner while Angel Fernandez plays second-in-command.