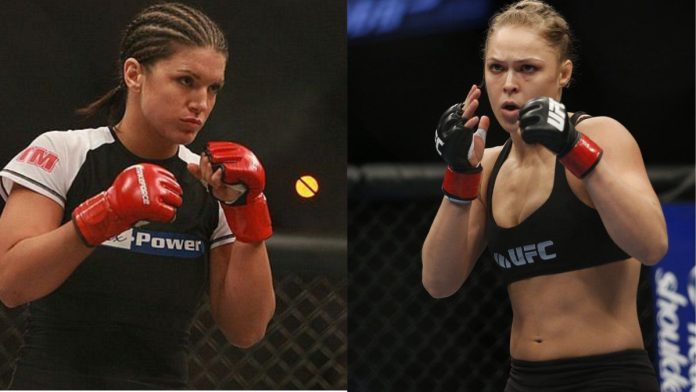 Gina Carano has responded to UFC Hall of Famer Ronda Rousey’s recent comments about the one fight she would return for.

Carano’s name came up when Rousey was asked during a recent appearance on The Kurt Angle Show about the possibility of returning to MMA. She revealed that there’s only one opponent she would return for and specifically pointed to Carano.

Rousey also clarified that there’s no bad blood between her and Carano and that she respects Carano for paving the way for her in women’s MMA. Carano fought for the inaugural Strikeforce women’s featherweight title against Cris Cyborg, losing via first-round knockout.

Before that, she had won seven straight fights over the likes of Kaitlin Young and Tonya Evinger. During a recent appearance on Unfiltered with Dan Bongino, Carano didn’t rule out the possibility of facing Rousey in a return fight.

“You know what? Just never put it past me. It could happen,” Carano said. “It would be six months from now because I have a lot of stuff I need to do …. I really want to create, I want to direct, I want to produce… I want to give Ronda Rousey a job in one of my movies so maybe there is something we can do there.”

Carano transitioned to a career in show business following her loss to Cyborg. She has appeared in highly-acclaimed shows such as The Mandalorian on Disney+ and most recently was featured in the movie Terror on the Prairie alongside UFC fan favorite Donald Cerrone.

As for Rousey, she is currently enjoying a second stint with the WWE, where she currently reigns as the Smackdown women’s champion.

At 40 years old, it’s unlikely we’ll see Carano fight in MMA following a 13-year hiatus. However, the chapter of her MMA career may not be completely closed if a fight with Rousey is offered.

Do you think we’ll ever see Gina Carano and Ronda Rousey fight in MMA again?