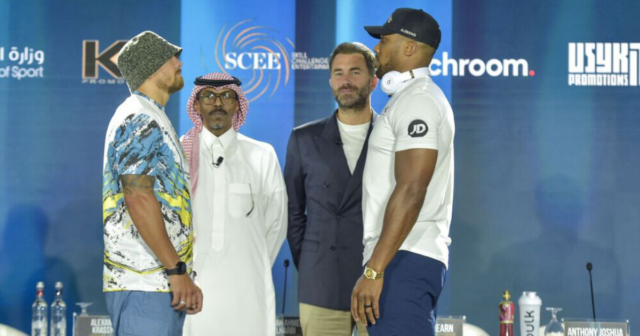 ANTHONY JOSHUA insists he will reign again as the comeback king.

The 32-year-old Watford ace admits he got his ‘a*** bust’ by Ukraine icon Oleksandr Usyk last September.

But the red-hot August 20 rematch is signed and sealed for Jeddah, Saudi Arabia where temperatures will hit 40 degrees and the heat on AJ to deliver will be scorching.

The reformed bad boy seems to have blamed decade-long mentor Rob McCracken for the baffling gameplan to try to outbox the 35-year-old southpaw, replacing the Team GB mentor with Robert Garcia.

And he reckons he has learned from all his mistakes – going right back to his childhood and the 2019 loss to Andy Ruiz – to make sure revenge and redemption will score him a hat-trick of heavyweight world title wins.

The London 2012 golden boy said: “With Andy Ruiz, I think people could see things weren’t 100 per cent but you have to be strong and thick skinned. We took our loss like a man.

“When I win I keep it moving and I thank everybody you have to be the same in defeat. I knew I could come back again.

“Usyk bust my a*** and I have to take that defeat like a man as well.

“But I hold myself accountable, I can admit when I am wrong and hold my head up high when I am right.

“In the fight in September I was wrong and he was right and I have to reverse that on August 20.