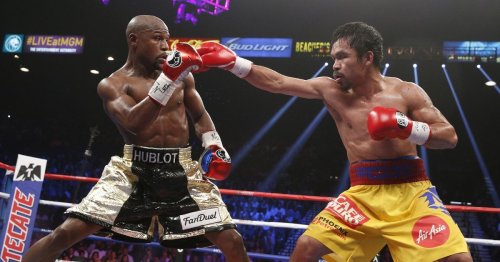 MANNY PACQUIAO has set his sights on a rematch with Floyd Mayweather – a month after the seventh anniversary of their ‘Fight of the Century’.

Pacquiao, 43, desperately chased a shot at redemption against Money after losing their showdown but missed out when his rival retired from professional boxing in the summer of 2017.

The pride of the Philippines called it a day last September but still wants to settle the score with the American – albeit in an exhibition bout.

“[I] would love to see it but Mayweather wants none of this smoke due to his ego.

“Senator Pacquiao would love an exhibition, if he was to return it would be this year – but that is a big if.”

Pretty Boy was last in action in May against former sparring partner Don Moore, who he dominated in their Abu Dhabi dust-up.

And the multi-millionaire plans to have another desert showdown later this year.

He said: “I would like to thank everybody in the UAE, the media, and everybody who covered this fight.

“I will bring another fight back to the UAE this year. It’s a secret.

“I don’t want to let the cat out of the bag right now.

“But we have an opponent, and I choose the UAE. It’s been a little rollercoaster ride for all of the fighters.

” I want to commend the fighters on just being patient.”