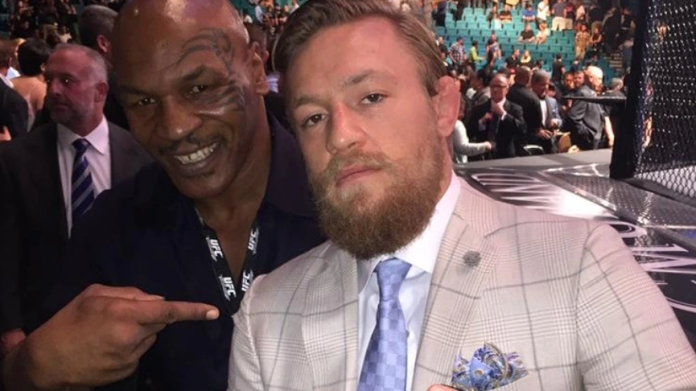 BOXING legend Mike Tyson has urged Conor McGregor to swerve the lightweight division’s big boys when he returns to the UFC.

McGregor, 33, is closing in on a blockbuster return to the cage just over a year after breaking his leg and has flirted with fights with the 155lb division’s elite.

Former undisputed heavyweight champion Tyson, however, doesn’t want to see The Notorious – who is on a two-fight skid – jump back into the deep end for his comeback fight.

During an appearance on The Fight Card podcast, Iron Mike said: “After a defeat, you should do a couple of fights to get your feet wet.

“Conor, I think you should build your confidence up and go do what you do: win excitingly.”

But Tyson isn’t a fan of the fight for McGregor’s return, saying: “Well, that’s a tough fight.

“He’s a warrior, regardless if he loses, He makes exciting fights. It’s hard to beat that guy.

“No big-time guy, let him get three fights and build his confidence back up. Every fight the opponent goes to a higher level.”

McGregor hasn’t tasted victory since his 40-second demolition of a battle-weathered Donald Cerrone at UFC 246 in January 2020.

And Tyson believes the Irishman would benefit from facing a similarly less dangerous opponent later this year.

“You get your experience down, three more fights, you feel good, then beat the last two guys are really qualified opponents, now you go back out there.”

McGregor – who is in the final stages of recovering the broken leg he suffered in his trilogy fight with Dustin Poirier last July – was eyeing a summer return to the octagon.

But UFC supremo Dana White expects the Dubliner to be back in action in the autumn at the earliest.

He recently told SunSport: “We’re looking at early fall, if everything goes right.”

White added: “If his leg heals right and he gets the clearance to really start training, then possibly early fall.”

Mike Tyson warns Conor McGregor to get a ‘couple of fights to get his feet wet’ and not to UFC big boys in MMA return (thesun.co.uk)