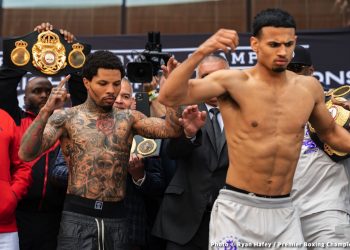 By Allan Fox: Rolando ‘Rolly’ Romero’s trainer Bullett says they won’t fight on Saturday night if his ankle is injured after he was shockingly shoved off the stage by WBA ‘regular’ lightweight champion Gervonta ‘Tank’ Davis at Friday’s weigh-in.

Bullett isn’t sure whether Rolly’s ankle will cause him problems on Saturday night after he fell off the stage when Gervonta shoved him from behind after the two fighters had successfully weighed for their main event fight on Showtime PPV at the Barclays Center in Brooklyn, New York.

When asked why Tank Davis resorted to shoving Rolly off the stage at an otherwise peaceful weigh-in, Bullett answered with one word, “Scared.”

Whatever the reason that Tank (26-0, 24 KOs) had for pushing Rolly off the stage, he put the fight at risk, and you got to wonder if this was an intentional move on his part.

Was it a fear-based move or one done out of anger & spite due to the way Rolly had made him look less than intelligent at the final press conference?

“This little pushing s***, that’s Tank being scared. He’s scared,” said coach Bullett to Fighthype, reacting to Gervonta pushing Rolly off the stage at the weigh-in on Friday.

“Why would you want to push a guy off a stage at a weigh-in so you can hurt his ankle and fight a handicapped Rolly?” Bullett continued. “I don’t know if he’s okay because when he gets back and his adrenaline is down.

“In every injury in sport, your adrenaline has to go down. Then you you got to figure out. We don’t know what Rolly’s ankle is going to feel like in the morning.

“I’ve never seen no b*** a** s*** like that from a champion. A three-division world champion, a pay-per-view star, you’re so f*** intimidated,” Bullett said when asked if he’d ever seen a fighter get pushed off the stage by his opponent during a weigh-in.

“You’re so f*** scared, you’re trying to injure your opponent before the fight. I’m not going to know,” said Bullett on how Rolly’s ankle will be tomorrow. “I’m not going to put a handicapped fighter in there.

“Scared,” said Bullett when asked what kind of fighter would want to push his opponent off stage the way Gervonta did to Rolly.

Rolly Romero WON’T fight if his ankle is injured after pushed off the stage by Tank Davis (boxingnews24.com)