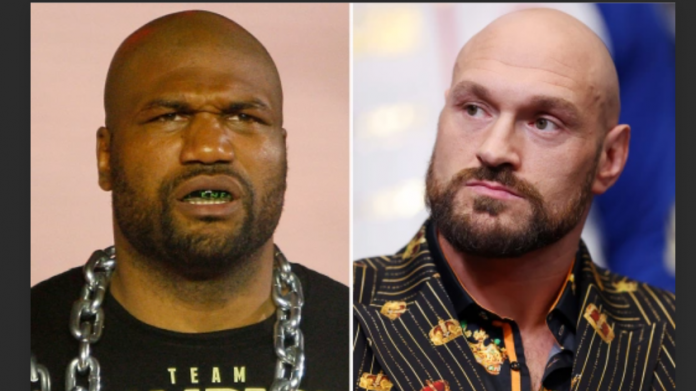 RAMPAGE JACKSON has called out Tyson Fury with the UFC legend desperate to be the retired boxer’s first MMA opponent.

Fury has teased a switch to MMA before and last year trained with UFC veteran Nick Diaz in Miami.

Diaz, 38, recently revealed throwback pictures of their May 2021 session and it caught the attention of Jackson, 43.

Unfortunately for Jackson – the former UFC light-heavyweight champion – Fury last year performed a U-turn on a move to MMA.

But Fury did confirm he would only be interested in a striking-only match with smaller 4oz UFC gloves on.

He told talkSPORT: “No, I’ve got no real interest in grappling up and down on the floor and all that sort of stuff.

“I’m a stand-up fighting man, I don’t wrestle up and down and grab each other’s arms and sit on each other and all that.

“I’ve no interest in all that stuff – I like to stand up and fight so would I ever compete as an MMA fighter? Hell no!

“Would I compete with small gloves on in a cage in a fight? Yes. But no gripping and grappling.”

The British boxing legend announced his retirement after beating Dillian Whyte, 34, in April and wants to face Ngannou in an exhibition.

And Fury’s promoter Frank Warren confirmed he would not stand in the way of talks.

Warren said: “All I can do is give him the benefit of my advice.

“All I will ever tell him is what I feel he should do but I will not say ‘you should do this’. I wouldn’t even attempt to go there.

“He’s a smart individual and whatever he decided to do will be for the benefit of himself and his family and that’s how it should be.”