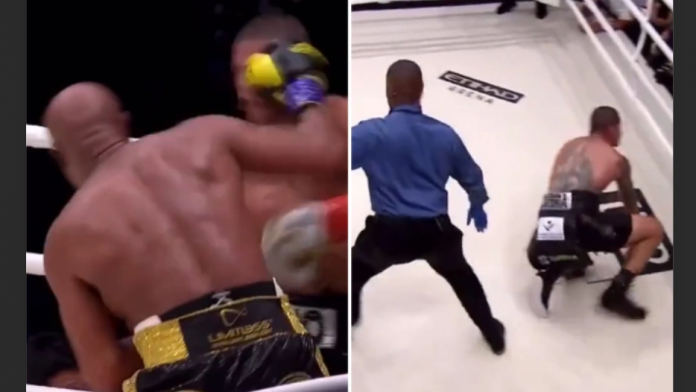 ANDERSON SILVA has one eye on Jake Paul after outclassing Bruno Machado with both fists.

UFC legend Silva, 47, was a clear – if unofficial – winner over MMA master Machado on the Abu Dhabi undercard to Floyd Mayweather vs Don Moore.

The Spider showed his class the more the eight-round exhibition progressed.

And in the closing stages he gave Machado, 34, a southpaw battering that threatened a knockout.

Silva said afterwards: “I am so happy to be here again, I feel it is my second home.

“Thank you to Bruno for giving me the chance to come here and fight. He is the king of MMA here in Abu Dhabi.”

And although he rates a money-spinning, mega match-up with YouTuber Paul as ‘possible’ he joked: “Maybe I’ll fight in a Jiu-Jitsu tournament.”

Silva insists Paul’s record of five wins out of five shows the 25-year-old is a serious and dangerous prospect.

The Brazilian-born American has argued: “People need to respect the Paul brothers.

“Those kids are talented, and they’ve opened people’s eyes about the good and bad in combat sports.

“I’m preparing my body for a challenge. We’ll see what happens.”

Machado, meanwhile, seemed thrilled to have merely competed against his idol.

He said: “It is very hard to fight someone you love.

“Thank you so much Anderson for giving me that pleasure. I love you.”