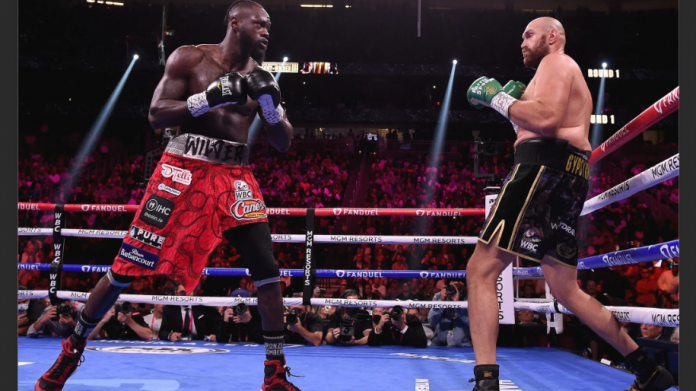 DEONTAY WILDER is in the running to fight for the WBC heavyweight title should Tyson Fury vacate it.

The Gypsy King teased retirement after his brutal knockout of Dillian Whyte last month but has yet to relinquish the prestigious green belt.

And former long-reigning champ Wilder could very well fight once again for the vacant title should Fury walk away from the sport.

WBC president Mauricio Sulaiman told Sky Sports: “Certainly [he is in contention to fight for the belt.

“Because he is the No 1-ranked contender in the division.”

Wilder, 37, hasn’t set foot inside the ring since being knocked out in the 11th round of his trilogy fight with Fury last October.

But the American is said to be champing at the bit to get back in the ring.

Sulaiman added: “I spoke to him a couple of months ago, he is doing great and he is looking forward to resuming his boxing career.”

Former unified champ Fury wants Wilder to fight for the WBC strap once it becomes vacant, telling Behind The Gloves: “I’d like to see Deontay Wilder fight whoever for it again.

“I don’t know how that’s [Wilder being No.1 in the WBC rankings] even possible.

“He’s lost three fights in a row and still No.1-rated. But that’s up to them.

“One thing, [though], Deontay made ten title defences, more than anybody else.

“He equalled Muhammad Ali’s record, beat Vitali Klitschko’s record, [he] doesn’t get the credit he deserves.

“And I do believe he’s still the second-best heavyweight in the world, Deontay Wilder.

“I believe he knocks everybody else out but me.”

Deontay Wilder ‘in contention’ to fight for Tyson Fury’s title and is ‘looking forward to resuming boxing career’ (thesun.co.uk)