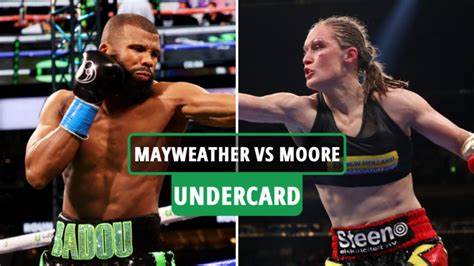 Floyd Mayweather vs Don Moore undercard: Who is fighting on huge Dubai bill?

FLOYD MAYWEATHER makes a return to exhibition fighting this weekend against Don Moore in Dubai.

‘Money’ hasn’t been in the ring since his clash with YouTube sensation Logan Paul last year in Miami.

But now he’s up against old sparring partner Moore, who has a boxing record of 18-0.

Mayweather’s clash with Moore will, unbelievably, take place on a helipad right at the top of the Burj Al Arab hotel in Dubai.

There will be just 20 VIP fans in attendance at the fight, with tickets costing up to $150,000 and only available as NFTs.

But the Mayweather vs Moore undercard will feature competitive boxing, with an ex-UFC star also set to feature.

Who is on the Mayweather vs Moore undercard?

Badou Jack, who has regularly featured on Mayweather undercards before, will fight on the helipad on Dubai.

And former Katie Taylor foe Delfine Persoon, who pushed the Irishwoman to the brink of defeat twice, will also be in action.

Former UFC star Anderson Silva is set to feature, too, with Bruno Machado in the opposite corner.

How to watch Mayweather vs Moore