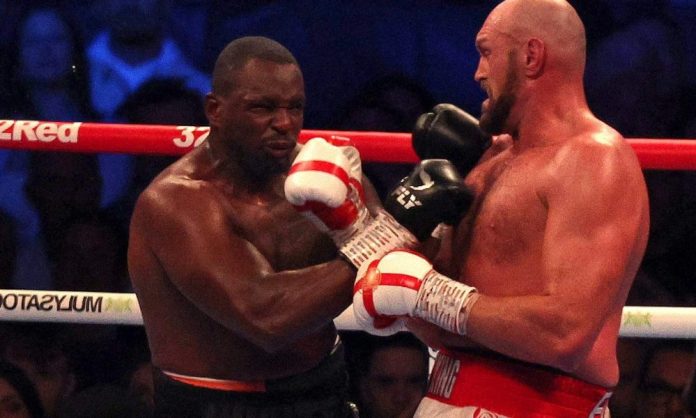 TYSON FURY brutally knocked out Dillian Whyte with a vicious uppercut in their domestic dust-up.

With less than 20 seconds of the sixth round remaining, Fury caught Whyte with a beautifully-timed right uppercut.

Whyte was badly dazed and crumpled to the canvas after a slight push from his former sparring partner.

The Brixton banger beat the count but was on wobbly legs when referee Mark Lyson asked him to walk forward.

Whyte almost crashed into the ropes seconds after the referee’s call to prove he was fine, prompting the Lyson to mercifully call a halt to the proceedings.

Wembley erupted after Fury’s victory in his homecoming was confirmed.

Moments after having his hand raised, an elated Fury said: “I’m overwhelmed with the support.

“I cannot believe 94,000 countrymen and women came here tonight to see me perform.

He added: “Dillian Whyte is a warrior. I believe Dillian will be a World Champion.

“I am one of the greatest heavyweights of all time and unfortunately for Dillian Whyte, he had to face me tonight.

“He is as strong as a bull and a heart of the Lion but you are not messing with a mediocre heavyweight.

“The best man on the planet.  I think Lennox Lewis can be proud of that uppercut tonight.”