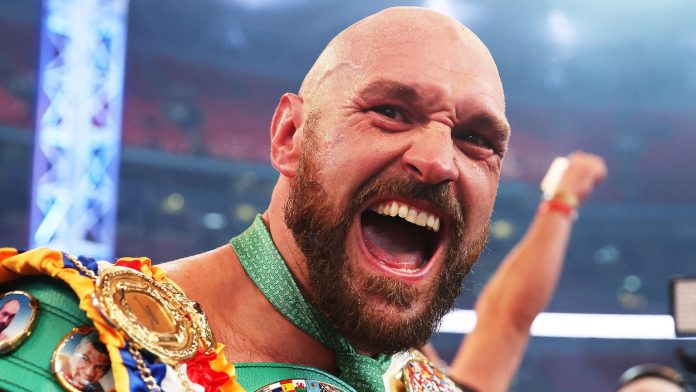 HE is in a class of his own, Tyson Fury.

And before his adoring public at Wembley Stadium last night the Gypsy King proved it beyond doubt – before sensationally announcing his RETIREMENT.

Dillian Whyte had been highly-ranked for years and waiting impatiently for his shot at the WBC world heavyweight crown.

Yet Fury comprehensively out-boxed him for six rounds and then knocked him out with a devastating upper-cut at the end of the sixth.

On a triumphant homecoming, Fury was not as aggressive and flamboyant as he had been in the last two fights of his glorious trilogy with Deontay Wilder – but he was every bit as impressive.

This may have been a mis-match but it was still a masterclass. First, Fury proved the complete superiority of his boxing skills, and then, once he had broken Whyte’s spirit, he let him have the full might of his punching power too.

There is nothing in all of sport like the sinister thrill of anticipating a world heavyweight title fight.

And here were two English fighters slugging it out before a rammed-out national stadium on St George’s Day.

Fury has been sticking to his story that this would be the final bout of his career but aged 33 and at the peak of his game with a major desire to see him fight both WBA, IBF and WBO champ Oleksandr Usyk, nobody has been buying that retirement talk.

This is despite the 6ft 9in powerhouse saying he will quit the sport in his post-fight interview in the ring.

The Gypsy King talks a lot, much of it is entertaining, but plenty more of his words must be taken with mountains of salt.

Wembley was chaotic, with the feel of a 94,000-strong stag do, pubs drunk dry and the traffic gridlocked.

It had been a long and winding road for Fury to finally pack out a major British stadium – his stunning victory over Wladimir Klitshcko in 2015, followed by a drug ban and a lengthy personal crisis, followed by an epic Stateside trilogy with Deontay Wilder which cemented his place as a true great of the game,

By the time this all-British clash was slated, there was little doubt that it would sell out rapidly – even with the largest capacity for a world heavyweight title fight since the 1930s.

These kinds of occasions were unheard of in British boxing just a few short years ago, but it was Anthony Joshua who normalised them, ever since his own defeat of Klitschko here four years ago.

By now, though, Fury had proved beyond reasonable doubt that he is a far superior boxer to Joshua – and could also lay claim to his own ‘people’s champion’ crown.

There had been controversy over Fury’s links with alleged crimelord Daniel Kinahan. And there is always controversy with the Gypsy King.

Yet few of those who snapped up tickets for this contest gave a stuff. Bad guys linked to boxing? You’ll be telling us there’s a Catholic Pope next.

Whyte, at 34, had been on the brink of a world-title shot for years and, after avenging a knock-out by Alexander Povetkin, the Body Snatcher’s moment had finally arrived.

As a fearsome puncher, everybody knew he had some kind of a chance here but Fury’s jaw had been so heavily tested by Wilder – he was knocked down four times yet remained unbeaten throughout those three classics.

The undercard was underwhelming but once the main event neared, Sweet Caroline was belted out at Euro 2020 volume and the lights of selfie-taking phones illuminated Wembley like tens of thousands of self-regarding fireflies.

And when ringmaster Jimmy Lennon junior gave it ‘laydeez and gennamen’ the volume was ear-splitting.

Fury, mocked up as succession of English kings to the strains of Jerusalem on Wembley’s big screens, strolled out in flag of St George robe and gloves, waggling his tongue manically to Kings of Leon’s Sex On Fire.

But while Fury had torn into Wilder from the opening bell in his previous couple of fights, the first round here was cagey and pat-a-cake.

Whyte showed some wild aggression in the second but Fury was an elusive target, his own work unflashy but effective, scoring with his jab.

By the third, Fury’s superior boxing skills were glaringly apparent and while he rocked Whyte backwards a couple of times, it felt the Lancastrian was toying with the challenger.

At the start of the fourth ref, it got dirty, Whyte landing a late one and Mark Lyson giving both men a ticking off but the pattern continued – the challenger swinging and usually missing, the champ landing on the counter.

A cut had opened up next to Whyte’s right eye and Fury scented his blood – landing several decent combinations and taunting his opponent, as he got on the front foot in round five.

In the sixth Whyte swung wildly and vainly, his the ropes, while Fury whispered sweet nothings in his ear. These men did not look in anything like the same class.

And when Fury struck it was utterly venomous – a ferocious uppercut that sent Whyte crashing to the canvas and unable to discover his sea legs.