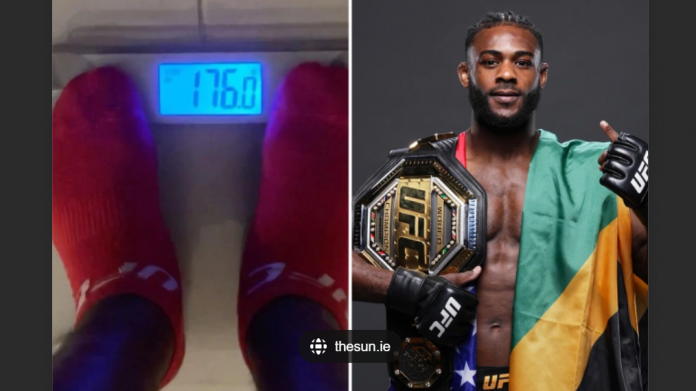 UFC star Aljamain Sterling has revealed he is feeling “sick and gross” after turning from Funk Master to Chunk Master following his win against Petr Yan.

The 32-year-old bantamweight champ has taken to social media to show he has put on almost THREE STONE within ten days of his UFC 273 weigh-in.

Sterling weighed in at 134.5lbs and tipped the scales on fight night at 152lbs for the fight with Yan, which he won via a split decision to defend and unify the bantamweight title.

He then shared to his fans his weight gain where he was tipping the scales at 176lbs.

Captioning the clip, he quipped: “I am a bacon right now! Enjoying the fruits of my labour, but this is getting ridiculous.”

Uploading the same footage on his Twitter account, he stated: “Look at this bantamweight! That’s a sick, sick, man! Exactly 1 week after my fight. Wow…

“I feel fat and gross. My cheeks are so big. I don’t recognise myself. Diet starts [tomorrow].”

And in a recent video posted on Instagram, the New York native has shown that he has cut an incredible 12 pounds as he now weighs 164lbs.

Speaking in the clip, he commented: “Alright, guys didn’t believe my weight, I was 176, but my weight is now firmly back under control.

Captioning the post, he joked: “No more Chunk Master! Time to get back to Funk Master!”

His fans were baffled by his rapid weight loss, as one user said: “How did you lose so much in such a short time?”

Another messaged: “Hw tf did you lose that much so quick lol.”