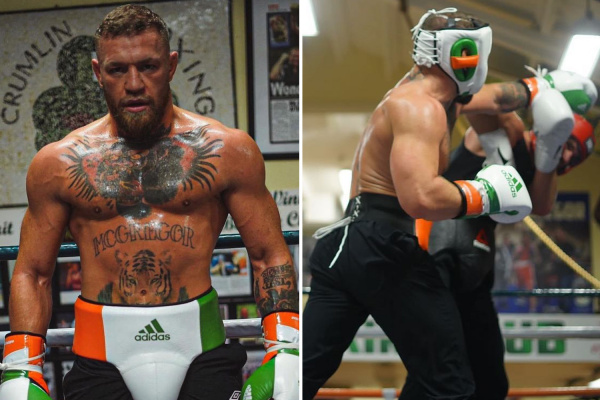 CONOR McGREGOR already looked fighting fit as he returned to sparring ahead of his impending UFC comeback.

The Irish superstar is building towards a UFC return this year and uploaded a series of training pictures.

It comes after McGregor started sparring again for the first time since suffering his horror leg break last July.

The former two-weight UFC champion, 33, has also been hitting pads regularly in the gym.

He broke his tibia in the first round of his trilogy trilogy bout with Dustin Poirier, 33, which later required surgery.

That came after his knockout loss to Poirier – the man he initially beat in 2014 – in their January 2021 rematch.

The former two-weight UFC champion has been recovering ever since the injury and recently called out welterweight king Kamaru Usman, 34.

McGregor, who was charged with speeding and driving with no insurance or licence, confirmed he will target a welterweight return.

He said: “Straight back into training.

“I’m looking forward to getting back into the octagon – we’ll see what happens, the leg’s getting better every day.

He then tweeted Usman: “Put your money where your mouth is then, oh wait.”

Usman’s manager Ali Abdelaziz tweeted: “If Conor wants, Dana wants nothing will make me happier than seeing Kamaru put a hole in his head.”

Conor McGregor shows off insane physique as UFC legend works up a sweat in sparring ahead of return following injury (thesun.co.uk)