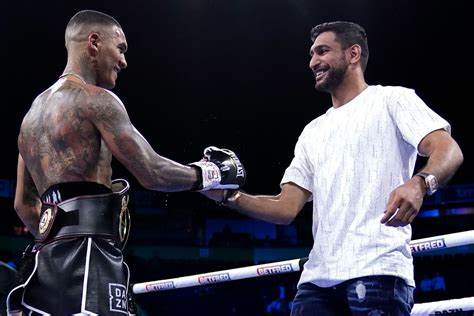 CONOR BENN reckons Amir Khan getting booed out of his ring could have KO’ed their potential summer showdown.

After battering Chris van Heerden, 34, inside two Manchester rounds on Saturday, the 25-year-old Ilford ace beckoned Bolton’s fellow welterweight into the ring with the idea of agreeing to a shootout.

Instead Khan, 35, who suffered a pasting at the hands of 10-year rival Kell Brook in February, did some of the best ducking and dodging of his brilliant career and left the crowd jeering his reluctance to commit to an cross-generation clash.

And Benn, now the 21-0 son of British ring legend Nigel, reckons that might have put the final nail in the coffin of their potential rivalry and perhaps even Khan’s career.

“I saw a few articles from him, saying he fancies the fight with me, so I thought we would get him in the ring and give him his chance and instead he said the total opposite.

“I can’t blame him because, if I was him, I wouldn’t fancy it either. Who needs me in their life? He looks and sounds like he’s enjoying retirement.

“It’s fine, I’m on a different trajectory in my career and the only way is up.

“I believe I’m one of the best welterweights in the world. I ain’t fussed who I fight next, I’ll fight whoever, any of them.

“He’s a former world champion, look what he’s achieved in the sport of boxing, it’s sad he got booed, but it is what it is.”

The much-improved Tony Sims student has now blitzed a handful of respected veterans but is yet to face a bonafide contender in his prime.

And the fans that have followed him between London, Liverpool, Leeds and Manchester in the last three years will be disappointed if the next clash is not against a welterweight champion or a household name.

Brook was targeted after his domination of Khan but he is set to take on middleweight Chris Eubank Jr in a catch-weight-grab-cash bout.

So Benn, mastermind mentor Sims and promoter Eddie Hearn need to pick a suitable step up to keep the learning curve going and fans interested.

“Brook would make sense for me,” Benn said. “He’s another one in the rankings, a former world champion, he’s just come off a great win over Khan.

“That would make sense for me in terms of my career but now I’m not too fussed about the Khan fight.

“I’ll fight anyone anywhere. I’ll fight in a telephone box.

“There could be Mickey Mouse and Donald Duck sitting at ringside, you’re in a fight, it could be anywhere.

“You’re not focused on that, you’re just focused on getting the job done and beating the other man up.”