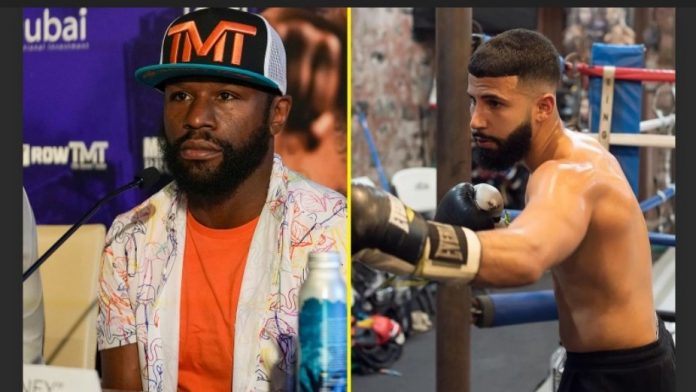 YOUTUBE star Adam Saleh is eyeing a fight with Floyd Mayweather in Dubai – and would not just come to make up the numbers.

Boxing legend Mayweather in December announced he would return to the ring with an exhibition in the Middle East.

But only now has he confirmed his comeback on May 14 against former sparring partner “Dangerous” Don Moore, 42.

Mayweather has warned it could me one of many in the lucrative UAE region which is becoming increasingly more involved in boxing.

It leaves Yemeni-American Saleh – who has twice fought in Dubai himself – offering himself up as a future opponent.

He told SunSport: “I’d love to box Mayweather, he’s another legend in the boxing game.

“Of course, he is who he is, he’s a world champ but I’m working hard too and I’ve got the youth on my side.

“I would love to have a fight with Floyd Mayweather and I feel I could give him some problems.”

But the unbeaten American continues to make spectacle cameos in the ring.

Most recently, in June he faced YouTuber Logan Paul – who weighed TWO STONE more – in an eight-round exhibition.

And Paul, 27, a pioneer in the new wave of celebrity fighters, took Mayweather the distance.

Saleh, 29, has boxed in similar bouts before but did also compete as a 14-0 amateur boxer during his teens.

And he is set to welcome Manchester United legend Patrice Evra, 40, into the ring for a shock fight.

It was scheduled for April 30 at the O2 Arena but has since been backdated.

Saleh is keen to share the ring with a legend of the boxing world after doing so with Old Trafford icon Evra.

He said: “Me and Mayweather, we are the same weight, so I’d love to share the ring with him.

“If that comes I would definitely take that, he’s around my weight and my height, same with Patrice.

“I’d never have fought him if he wasn’t around my weight, but he is.  Boxing has weight classes for a reason.

“It’s why Floyd doesn’t want to fight Logan again or Jake, he noticed the difference in weight classes.”

Patrice Evra’s boxing opponent Adam Saleh eyes Floyd Mayweather fight in Dubai and says ‘I could give him some problems’ (thesun.co.uk)