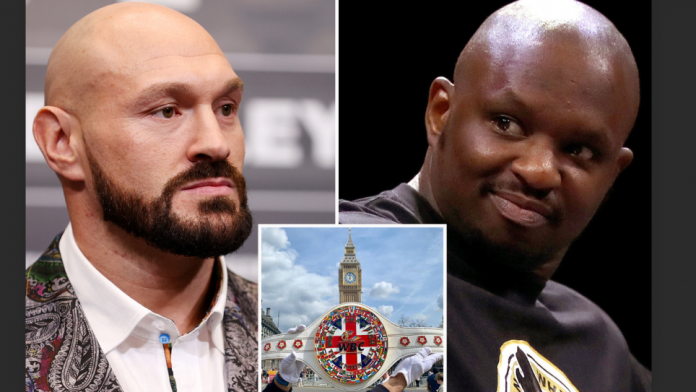 THE WBC have revealed the special new “Union Belt” which will be handed to the winner of Tyson Fury versus Dillian Whyte.

The Gypsy King defends his WBC and Ring magazine heavyweight titles against the Body Snatcher at Wembley on April 23.

But the WBC have created a commemorative one-off strap to add to the stakes.

The specially-created design includes a Union Jack flag in honour of the all-British bout.

And instead of the classic green-strapped WBC belt, the Union Belt has a sleek white strap that will be wrapped around the waist of either Fury or Whyte.

“This unique belt will be presented as a special trophy to the winner of the highly anticipated fight between WBC Heavyweight Champion Tyson Fury and WBC interim Heavyweight champion Dillian Whyte.

“The Union belt extols special elements to celebrate and commemorate the United Kingdom through boxing.”

Fury hasn’t fought in the UK since clashes in 2018 against Sefer Seferi in Manchester and Francesco Pianeta in Belfast.

All five of his fights since then have been Stateside, three of which were against American slugger Deontay Wilder.

The champ had claimed that he will retire with £150million in the bank from his career earnings after the bout – whichever way it finishes.

But his father John Fury has laughed off that claim today.

He suggested his son is just on the wind-up and would not know what to do without boxing.

Responding to the retirement talk, Fury Snr said: “Bulls***. Tyson is as mad as a box of frogs, where’s he gonna go without boxing?

“Boxing’s his life… Tyson’s the biggest wind-up merchant in the world, people should know him by now.”