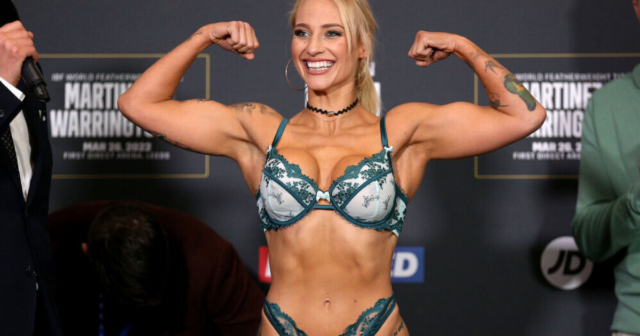 A lot of haters write off my boxing skills because they can’t see past my boobs, says new world champ Ebanie Bridges

EBANIE BRIDGES has hit out at “haters” who doubted her boxing skills because of her good looks.

On Monday Bridges posted a Twitter clip of her unloading on Roman in the ring, leading one fan to reveal he was “completely wrong” about her ability.

In response Bridges tweeted: “You musta been distracted by my boobs and couldn’t see the skill.

“Don’t worry your not alone, lots of haters out there can’t get past the boobs… Glad you can see you was wrong.”

Bridges is one of the biggest figures in women’s boxing but her glamourous side and weigh-in antics – often dressing in lingerie before fights – means the Australian’s ability gets overlooked.

And she is clearly fed up at not being taken seriously having hit out at the doubters after defeating Roman, who had held the world title since 2017.

Bridges told DAZN immediately after the fight: “Can I f***ing fight or not? F*** you guys who think I can’t fight.

“I can f***ing fight. I can box, I can fight, and I can look hot on the scales so hopefully, I’ve proved a lot of doubters wrong.

“I feel proud of myself, and I feel extremely happy because it means everything I have sacrificed and all the work I’ve done has been worth it.

Bridges’ record shows she certainly can fight having won eight fights and lost just one since turning professional in 2019.

The fighter only took up boxing in 2016 having worked as a ring girl previously, so it has been quite a rise to becoming world champion.

A lot of haters write off my boxing skills because they can’t see past my boobs, says new world champ Ebanie Bridges (thesun.co.uk)