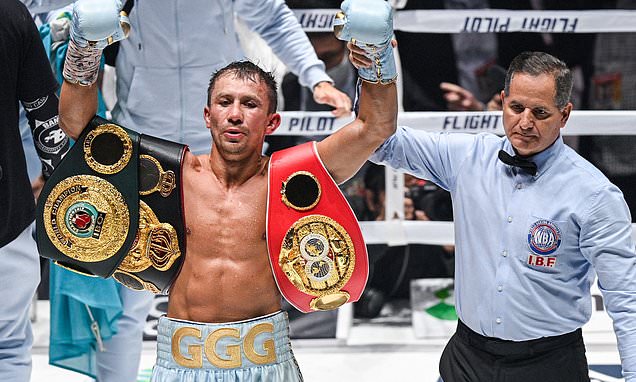 Kazakh boxer Golovkin, who turned 40 on Friday, sent his opponent to the canvas with a big right hand and Murata’s corner threw in a towel.

Golovkin added Murata’s WBA title to his IBF and IBO belts after his first fight since December 2020.

A third bout against Canelo Alvarez could be next for Golovkin, whose only defeat in his 44-fight professional career came at the hands of the Mexican boxer.https://player.daznservices.com/player/v3/player.html#59ac2da5888591f1d18cb921a8.xsohe0a9vwom1aofo5is4krre$s=1&location=https%253A%252F%252Fwww.dailymail.co.uk%252Fsport%252Fboxing%252Farticle-10702737%252FGennady-Golovkin-stops-Ryoto-Murata-ninth-round-unified-super-middleweight-champion.html%253Fito%253Dfacebook_share_article-sport-preview%2526fbclid%253DIwAR0n-w-8ywLC68gbIMS2cC4cUINoG8uYla8Kgh4coq0R8b0y5_2Bd0g5vWU&visibility=hidden&secure=true&embedStyle=s

Golovkin was shaken in the early rounds but a right hook, which saw Murata’s mouthguard fly across the ring, in the fifth changed the course of the fight.

Eddie Hearn then teased a potential trilogy fight, saying: ‘What a fight!!! After 400 days out of the ring and a slow start @GGGBoxing brutalises Murata in Japan to unify the division..all eyes on #CaneloBivol.’

‘Murata was a true warrior and he fought to the very end,’ said Golovkin (42-1-1, 37 knockouts) during his post-fight interview with DAZN.

‘He’s an Olympic champion, he was the WBA champion, and we’re extremely happy to have organized this event.

‘I’d like to thank my fans from Kazakhstan, especially those who travelled here to Japan.’