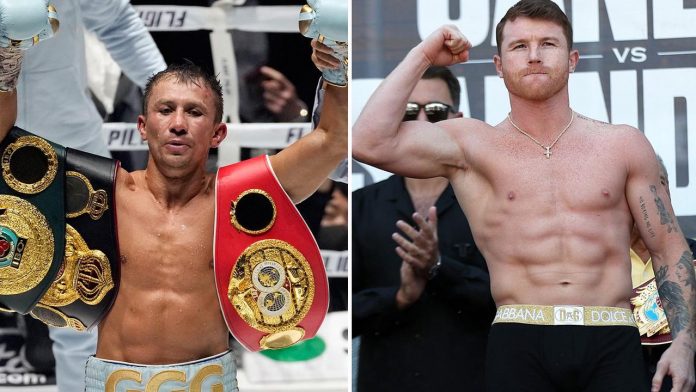 GENNADY GOLOVKIN will get knocked out by Canelo Alvarez, according to Tim Bradley who was unimpressed by Triple G’s win over Ryota Murata.

The 40-year-old veteran returned to the ring for the IBF & WBA middleweight unification match in Saitama, Japan – earning a ninth round stoppage over his opponent.

But, the Kazakhstan-born fighter appeared lethargic in the first four rounds as he laboured to victory.

Golovkin could face the Mexican on September 17, if Canelo overcomes WBA light-heavyweight champion Dmitry Bivol on May 7th.

But American Bradley believes he would be easy pickings for the 31-year-old.

The 38-year-old told Fighthype: “He’s going to mop up Golovkin.

“I thought Golovkin looked terrible at the beginning and then closed strong at the end, which is good.

“It showed that he has great conditioning. He’s still able to fight. He still has some power, yeah.

“Punch placement, and I saw some good lateral movement from him. But Canelo is on another level, man, for Golovkin.”

Canelo has fought at that weight and 175. Come on, dog. So, I see him [Canelo] beating him [Golovkin] and stopping him late.”

Bradley already believes Canelo will have a game-plan to defeat his foe.

“You saw it early on in his fight against Murata, Murata was going down to the body and pushing him back,” he said.

“That’s what Canelo is going to do. He’s going to press forward [against Golovkin].

“I think conditioning-wise, Canelo is at his peak right now, he’s fighting at his peak.

“I see him stopping him [Golovkin], bro, and if he doesn’t stop him, he’s going to hurt him really badly in the later rounds for sure.”