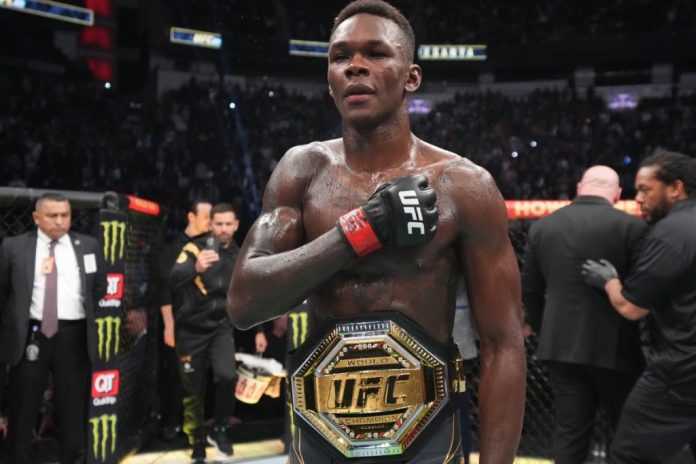 UFC superstar Israel Adesanya has revealed his “jaw hit the floor” when he learned about his net worth.

The dominant middleweight champion has become one of the promotion’s highest earners in recent years thanks to his exploits inside and outside of the UFC octagon.

Despite raking in hundreds of thousands of pounds for each of his fights, Adesanya, 32, paid little attention to his growing wealth – the full of extent of which was revealed to him by his dad last Christmas.

During an appearance on Hotboxin’ with Mike Tyson, The Last Stylebender said: “I love learning, that’s where my pops comes in.

“Just over Christmas I went home, my pops is the guy is behind the scenes helping me make my money grow and make my money work for me.

“He sat me down and told me how much I was worth and my jaw hit the floor.

“Money’s gonna comes, money’s always gonna come. I don’t struggle for money. In the UFC, [everyone you fight] is a killer, he’s a guy that can beat you.”

Adesanya’s motivation for competing inside the cage is no longer driven by financial security.

Speaking ahead of his UFC 271 rematch with Robert Whittaker, he said: “If this was about money, I would’ve bounced.

“I would’ve done this maybe three fights ago because I’m kind of set.

“I have one of the smartest men with money behind me and he’s helping me flip money the smart way.

And Nigerian-born Kiwi believes his bumper new deal is the result of all the chips he brings to the table.

He told SunSport: “Yeah [it’s been a combination of that], and then some.

“Even the Oceania situation that we have going on with myself and [Alexander] Volkanovski as champions and the team that we have building over there.

“And that’s how the whole world is watching us because of what we’re doing in the UFC.

“[There have] been a lot of things, a lot of factors have played into the fact that now UFC has seen my value to the company.

“[And] they’ve shown me my value, which I really appreciate. So I look forward to doing more good business with them.”

UFC superstar Israel Adesanya reveals his ‘jaw hit the floor’ when he learned his whopping net worth from his dad (thesun.co.uk)