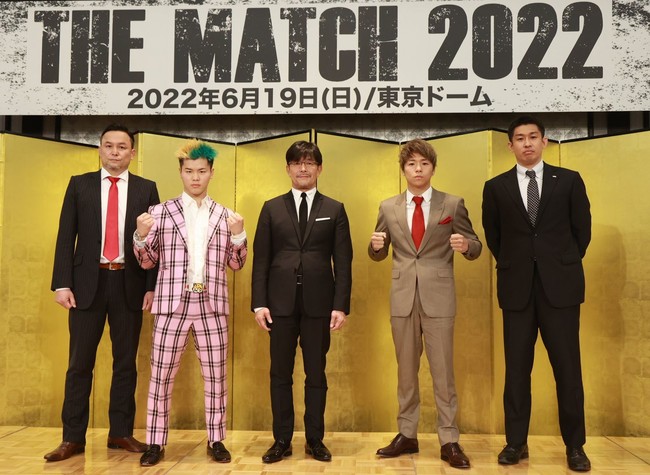 K-1 Executive Committee The tournament title of “Tenshin Nasukawa vs Takeru” has been decided as “THE MATCH 2022”! Tournament outline, tickets, broadcast distribution … The largest event ever inevitable

All games will be delivered live on ABEMA PPV (scheduled for 6-8 hours). The tournament will be 15 to 16 games, and only standing games will be held.
The ticket is “the highest amount in Japanese martial arts history and Japanese entertainment history” (Representative Sakakibara). VVIP 1st row 3 million yen, 2nd row 2 million yen, 3rd row 1 million yen.

Representative Sakakibara said, “In order to provide the best event held at Tokyo Dome in the past, martial arts will catch up with major sports and will overtake. I will try to overtake all the events that I did at Tokyo Dome in the past. I think, and devise so that people will say that I have never seen a dome with such an audience. I hope to create comprehensive entertainment suitable for one battle in which two people fight for their lives. I will. ”

Representative Ito said, “Dream match, a battle of this century. I think it will give dreams to the next generation of children and become a detonator. I will do my best.”
The rule of interest is a contract weight of 58 kg and a weight of 62 kg plus 4 kg on the day. The additional rounds were 3 minutes and 3 rounds, and 1 extra round. “Complete settlement rule” that judges only the contents of the extended round with a mast.

Takeru said, “The details of the match have been decided, and we are practicing, losing weight, and making adjustments. We will replace various expectations with power to win the best and win the best, so please support us.” Nasukawa said, “I haven’t said anything in particular since I came here. I will definitely win. I will definitely win. I will win in any way. I think the last game of the kick is the biggest thing in my life. , Anything wins, “he said with enthusiasm. At the press conference in December last year, Takeru, who was hoping for “unlimited time, complete settlement rule”, said that it was an extended one round, “Because the fixed rule is a fixed rule. It was decided that a complete settlement rule can be done. And, as Tenshin said before, I will defeat him with KO so that I don’t have to go to the extension. ”
Regarding the fact that the most expensive ticket price was 3 million yen, Takeru said, “No, I thought it was expensive (laughs). I’m glad that you added this match as such a value. I will win the match with the content that matches. It’s a pity that I can’t see my friends in front of me, but I would like to play a match that matches. ” Nasukawa, on the other hand, said, “I thought it wasn’t kind to children (laughs). But I’m glad if you know that this game is worth it. Finally, in this game. I wanted to appear in a textbook. ” When asked about Nasukawa’s enthusiasm for “I want to appear in a textbook,” Takeru said, “I want to make a proof that I have done martial arts and a proof that I lived as a martial arts. It will be exciting and lead to the future. To be the same as or better than general sports such as baseball and soccer. I want to win and open up the future. ”
The three members of the executive committee were asked “what kind of game do you want to play?”, And producer Nakamura said, “I want to play a game that I can’t usually play. I don’t know, but the K-1 players are ready, so I feel like I’ll do it if I do it. ” That’s it. ” Sakakibara said, “Maybe it will be an exciting card for fans of standing skills and those who love and see Japanese martial arts.” When asked for a message to the viewers as it will be broadcast live on Fuji TV, Nasukawa said, “I think the last match on my TV was Omisoka RIZIN. I wonder if the match was broadcast on TV and everyone is getting closer to getting along. ”
Takeru said, “I’m happy to be able to play a match with the goal of returning martial arts to terrestrial golden time. I think there are people who happen to be addicted to martial arts when they see terrestrial broadcasting, so I’m raw. I’m really happy to have you broadcast it. I’d like to play a match that makes people who see it for the first time think that martial arts are the best. ”
Finally, when asked for a message to each other, the two commented: Takeru said, “It really isn’t. All you have to do is hit each other in the ring, kick each other, and decide which is stronger.” Nasukawa says, “Let’s finish each other well and give the best performance.” It was a press conference that made us feel the mood of the decisive battle for “THE MATCH 2022”.

K-1 Executive Committee The tournament title of “Tenshin Nasukawa vs Takeru” has been decided as “THE MATCH 2022”! Tournament outline, tickets, broadcast distribution … The largest event ever inevitable – Japan NEWS (re-how.net)